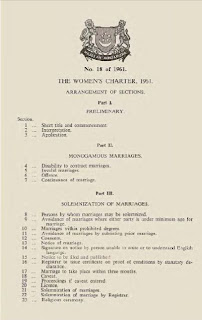 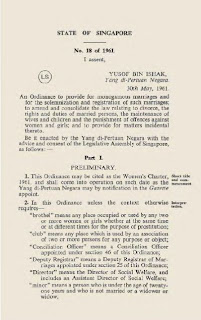 （The women's charter. An ordinance to provide for monogamous marriage and for the solemnization of such marriages. 1961 ）

“ (A) major advance in social legislation not only in the country but in South East Asia.” ---Goh Keng Swee described the Bill during the debate in the legislative assembly. The Straits Times 7th April 1960. 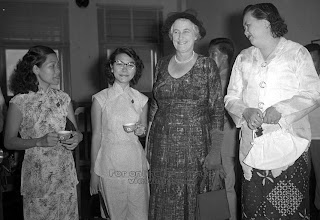 “Mr Speaker, Sir, regarding the Women's Charter which was introduced by the Minister for Labour and Law at the last Assembly sitting, with a view to improving the lot of women, I support the motion of the Minister. This Charter, as drafted has incorporated some of the provisions of a number of Ordinances. It has also incorporated the opinions of the people of Singapore. It has also adopted those of the existing laws in China, which have some merits. Therefore, I believe the Minister has improved this Bill, which is applicable to and practicable for the people of Singapore. This Bill, I believe, will receive the support of all sections of the people.

The fundamental principle of the Women's Charter is to enable women to have their rights safeguarded by legislation, and to give people far-reaching stability in marriages.

The marriage system provides for monogamy to enable both the husband and the wife to enjoy equal status in their matrimonial life. The previous evil custom will vanish with the coming into operation of this Charter The passing of this Women's Charter will not only enable women to be safeguarded in law but will also bring about a revolutionary change in society on a practical basis.

On this side of the House, I wish to point out that the fundamental principle of this Women's Charter is twofold. The problems of women are the result of an unreasonable society. Men take women as pieces of merchandise. The inhuman feudalistic system has deprived women of their rights. In a semi-colonial and semi-feudalistic society, the tragedy of women was very common. Men could have three or four spouses. Men are considered honourable, but women are considered mean. It was common in those days to regard having one more female in a Chinese family as being very despicable. Women in our society are like pieces of meat put on the table for men to slice.

The P.A.P Government has made a promise. We cannot allow this inequality in the family to exist in this country. We will liberate women from the hands of the oppressor. With the passing of this legislation, women can contribute their part to the country. Our country has now obtained self- government. To safeguard the stability of our parliamentary democracy, we must first of all have internal stability. We must put our society in order. Only then can we safeguard our parliamentary democracy. On the whole, the matrimonial system plays a very important part in the social order. There is a Chinese proverb, which says that if every family has matrimonial harmony, then we can control the country. The people in the old days abused marriages. They took to marriages as a schoolboy would take to playing. The rich had their way with marriages. This created disorder in the society, and the women rose against this unreasonable social system.

In Singapore under the colonial government, marriages were given a feudalistic aspect. The ideals behind marriage were not respected. In this new society there are many people who have many wives. To the rich people, their wives are their property. But to the poor, things are very difficult. These are due to the bad marriage system and it also affects our society. In order to show respect for marriage, we must have a sound marriage system. Of course, to depend only upon a law to get rid of all these bad practices and customs is very difficult, because marriages in Singapore have not been put on a proper basis for many years. It takes a very long time to educate the people to regard marriage in the proper light. Only then can we have a good and sound marriage system. Only then can we solve the problem of marriages and the relationships between men and women. ”---Singapore Parliament Reports. Vol 12. Sitting date 1960-04-06 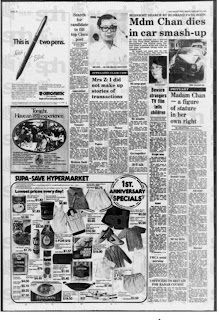 “The feudal social setting prevailing in the fifties was loaded against the women. Then, the status of women in the family and the society at large was inferior to men. Polygamy was common. Education for girls took a backseat vis-a-vis the boys. Most girls were not educated, or at best primary school educated. Very few had secondary education. Jobs were not easy to come by and pay was never equal for the same job.

To take part in politics was frowned upon if not ridiculed. One needed courage and determination to brace oneself against prejudices of society, and opposition from family elders, to take part in active political campaigning. Especially for a party which could lead one into conflict with the colonial authority ...”

“I would not like to give the impression that the Woman's Charter was easily passed. Actually it was a very tough fight. She was lucky that Kenny Byrne was the Minister for Law. He was sympathetic. . . . But some in the party, well, they kicked up a row.

Especially when it came to the registration of marriages. At that time, it was quite common for a man to have more than one wife. Even within the party, some members, well, their fathers had more than one wife. So how were they going to register? There was a ruckus.”

“Women had won the vote on 1955. After that time, the women's vote was very important. Especially after the party had split in 1961. The PAP needed the support of women! By 1961, the women's vote was crucial in Referendum and subsequent electoral fights with the Barisan Socialist. So women became powerful, and they could demand their rights. ” ---p177.  Chew, Melanie. Leaders of Singapore. 1996.

Email ThisBlogThis!Share to TwitterShare to FacebookShare to Pinterest
Labels: general election, once upon a time, 政治, 殖民地, 生育, 道德

Thank to our predecessors who prepared to sacrifice.

Thanks for posting this. This was an inspirational read for someone born in the 1990s.

This article presents clear idea for the new visitors
of blogging, that really how to do running a blog.