From Titanic to Costa Concordia， 100 years journey to ship safety

I worked in the field of ship engineering for more than 2 decades. Knowing the imperfection of statistical rules and standards applied to engineering design, how would ship operator’s errors lead to catastrophe, the difficulties in imparting safety procedures and culture among a team of international crew who speak different languages, and the vulnerability of individuals in the ocean, my family and I have not board a cruise liner for holiday. My response may be extreme. However, what I have not told them was the ship accidents that I investigated and many nightmares that woke me up in the middle of the night. They made my heart very heavy.

Another incident of happiness turned into misfortune happened on Friday 9.42pm local time, 13 Jan 2012. The Italian Cruise ship Costa Concordia leaning on its starboard side in the waters off Giglio Island, 25km from the Italian mainland, after running aground. A dramatic night-time rescue swung into action after the 114,500-ton Costa Concordia hit a reef or sand bar as passengers were having dinner at about 8pm. A gash of 50m was ripped across the side of the ship. 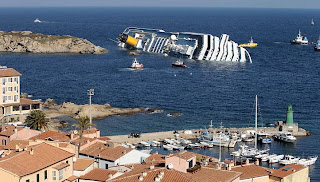 The cruise liner's captain then tried to steer the ship towards shallow waters near Giglio's small port to make evacuation by lifeboat easier. But after the ship started listing badly, lifeboat evacuation was no longer feasible. Some passengers, apparently in panic, had jumped off the ship into the sea. Five helicopters from the coast guard, navy and air force took turns airlifting survivors still aboard and ferrying them to safety.

There were 4,234 passengers and crew on board, 4,165 survived.  About 70 passengers were either missing or died. 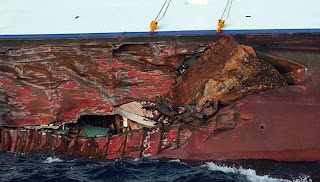 By the time the first lifeboat was launched, it was 80 minutes after the hull was punctured. Passengers complained that the crew failed to give instructions on how to evacuate the Costa Concordia.

'It was hell... They told us to stay calm but you could see the fear on everyone's faces, including the crew,' ANSA news agency quoted an unnamed passenger as saying.

Cruise ship worker Fabio Costa told the BBC: 'Everything just started to fall and everybody started to panic and run.' 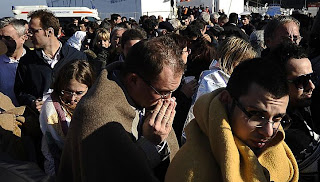 Christine Hammer, 65, from Bonn, Germany, was shivering near the harbour of Porto Santo Stefano after stepping off a ferry from Giglio. She was wearing elegant dinner clothes - a cashmere sweater, a silk scarf - along with a large pair of hiking boots that a kind islander gave her after she had lost her shoes in the scramble to escape. Left behind were her passport, credit cards and phone.

'We heard a crash. Glasses and plates fell and we went out of the dining room and were told that it wasn't anything dangerous,' she said.

'There were scenes of panic like on the Titanic. I don't know how this could happen. The captain is crazy,' passenger Mara Parmegiani told Italian media by relating Costa Concordia with Titanic.

The Titanic story has been told and retold. Titanic is a British liner that also had its hull ripped open, but by an iceberg, on 14 April 1912. It was 100 years ago. With less than 2 days left on their 7-day journey, Titanic’s passengers began to look forward to reaching New York. The 3rd class common rooms buzzed with excitement, while the social elite of 1st class held a gala dinner. Within the next 3 hours after hitting the iceberg, the 270m length, 50,000 ton ship (about the size of an aircraft carrier) ripped into 2 pieces from around midship and rested at 3.8km beneath the ocean.  Out of 2228 passengers and crew boarded for the maiden voyage from Southampton to New York, only 705 survived. 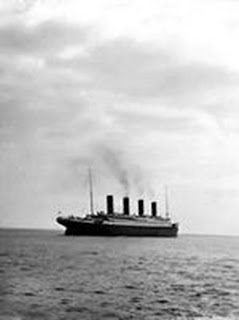 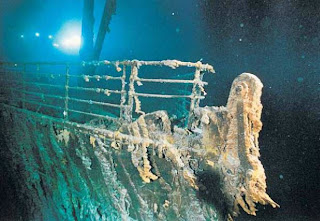 (A section of the bow after 100 years in the ocean)

The key differences between early 20th century and early 21st century for the two tragedies are time of optimism and progress. In the 1910s, an industrial boom in the US made a few wealthy and a better life for countless others. In the 2010s, industrialisation has been more or less saturated in US and Europe. These two continents are heading towards unprecedented national debt and economic downturn. 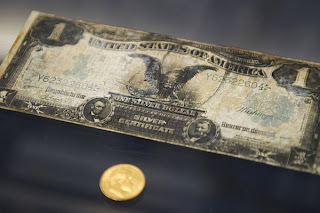 (Chasing after an American dream. Money recovered by undersea robot)

The iceberg that collided with the Titanic in the North Atlantic Ocean most likely came from Greenland. Warm weather caused huge chunks of ice to break off Greenland's glaciers. These icebergs floated south with the ocean current. The actual damage to the ship consisted of 6 ruptured seams in the riveted plates at starboard forward. They distributed along the forward 6 compartments (93m, Titanic has 16 compartments) at about 6m below water line. 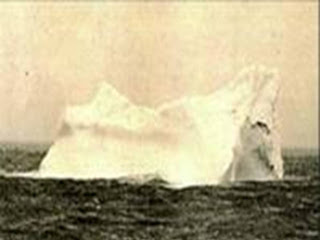 (The iceberg that collided with Titanic. Photo taken 3 days after the collision. 1912) 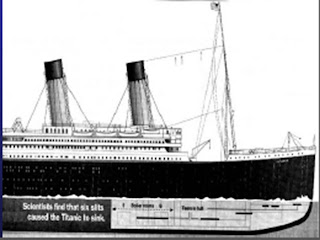 (6 ruptured seams spanned across 93m of the starboard of the bow at 6m below waterline.)

- Apr 14th  11:35 pm: Lookouts spotted the iceberg 1/4 mile ahead.
-11:40 pm:  Titanic collided with the iceberg and damaged the hull
-Apr 15th Midnight: Watertight compartments were filling; water spilled over the tops of the transverse bulkheads
-1:20 am: The bow pitches; water flooded through anchor-chain holes
-2:00 am: The bow continued to submerge; propellers lifted out of the water.
-2:12 am:  The stern raised up out of the water; the bow, filling with water, grew heavier
-2:18 am: With 40,000 ton of water, the bow ripped loose; the stern rose to almost vertical
-2:20 am: The stern slipped beneath the surface
-2:29 am: The bow strike the ocean floor
-2:56 am: The stern strike the ocean floor.  600m from the bow. 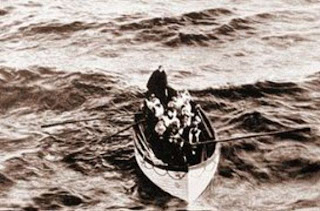 (A Titanic's lifeboat in the choppy sea, waiting for rescue. Reuters 1912)

On September 1, 1985, oceanographer Bob Ballard and his crew discovered the wreck of the Titanic about 350 miles southeast of Newfoundland, Canada. In 1991, the first purely scientific team visited the site. The dive was called the IMAX dive because the purpose was to create a film for IMAX theatres. The Soviet submersibles used in the dive were capable of staying submerged for 20 hours. The submersibles were equipped with 110,000 lumen lamps for deep sea exploration. Usually the dive was about 12 hours.  It took 2 hours for the submersibles to dive and another 2 hours to surface. 8 hours were spent on research and recovery. 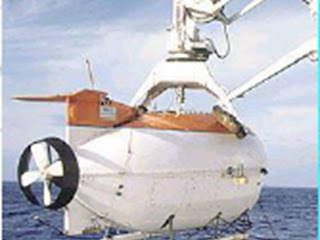 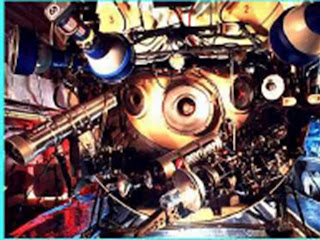 (Internal compartment of the submarine. Note that the crew were not permitted to eat, drink or shit in the congested submarine. c.1990s)

During IMAX dive, a chunk of metal lying on the ocean floor that once was a part of the Titanic's hull was recovered. The piece of steel was 25mm thick with three rivet holes, each 30mm in diameter. This dead body enable extensive researches to uncover additional clues to the cause of the rapid sinking of the Titanic.

Some studies have concluded that the watertight compartments contributed to the disaster by keeping the flood waters in the bow of the ship. If there had been no compartments at all, the incoming water would have spread out, and the Titanic would have remained horizontal. Eventually, the ship would have sunk, but the ship would have remained afloat for at least another six hours and even days before foundering. This amount of time would have been sufficient for nearby ships to rescue all of the passengers and crew.

The first hint that brittle fracture of the hull steel contributed to the Titanic disaster came following the recovery of a piece of the hull steel from the Titanic wreck. The condition of the edges of the piece of steel appeared almost shattered, like broken china. The metal showed no evidence bending or deformation. Typical high-quality ship steel is more ductile and deforms rather than breaks.

Similar observation was found in the damaged hull steel of the Titanic's sister ship, Olympic, after a collision with a Royal Navy ship while leaving harbour on September 20, 1911. The plate failure exhibited little plastic deformation and the edges were unusually sharp, having the appearance of brittle fractures. 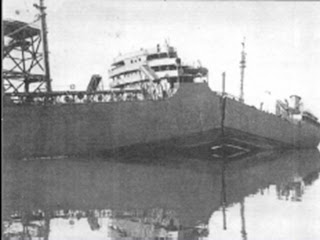 (The series of Liberty ships suffered 8 of such hull fractures during World War II. Similar observation was found in the damaged hull steel of the Titanic's sister ship, Olympic. c.1940s )

The mechanics of ductile-brittle behaviour near freezing temperature came as a result of the large number of hull failures of Liberty ships during World War II.  8 of these fractures forced abandonment of ships at sea. Fractures of the steel plate in Liberty ships only occurred at low sea temperatures for which the impact energy of the steel was 20 Joules. At low temperature, steel changes property from ductile to brittle and prone to cracking. This is called Ductile to Brittle Transition Temperature (DBTT). Manganese in structural steel helps to lower the DBTT and thus improve the strength at low temperature. Sulphur which commonly found in iron ore increases the DBTT and should be avoided. 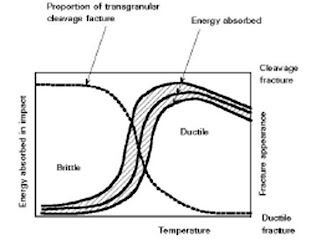 Note that the impact energy of steel recovered from Titanic was found to be very low (brittle) at -1°C.  This was the estimated sea temperature at the time of collision with iceberg. However, it was the top quality steel in that era.

Titanic carried lifeboats for just over half of the passengers and crew on board although the Titanic could carry two rows of lifeboats. One row was removed before the voyage to make the deck more aesthetically pleasing. The 20 lifeboats actually exceeded British Board of Trade regulations requirements by 10% capacity. At that time, lifeboats were viewed as a means of abandoning ship for a rescue vessel in near distance. The ship was seen as its own lifeboat. The technology of the time also did not provide for a reliable means for launching a large number of lifeboats in short time. 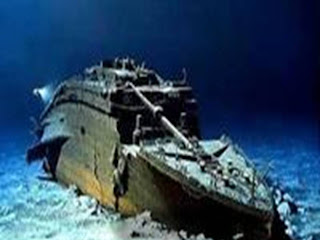 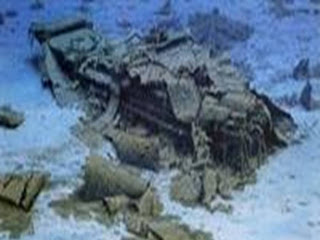 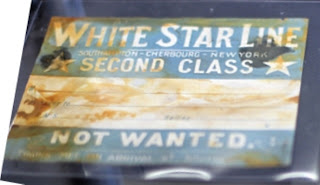 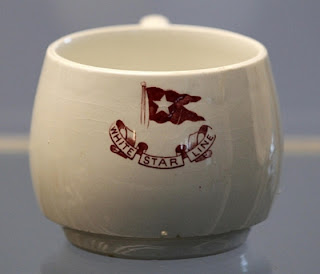 (Titanic was owned by White Star Line. The cup was recovered by undersea robot)

Titanic led on to massive improvement in safety at sea. The first version of SOLAS convention was established 2 years later in 1914. Improvements in ship safety include:
How about the fate of the two sister ships Olympic and Britannic? Olympic was requisitioned by the British Government and deployed as a troopship during World War I. Olympic struck and sank a German submarine, U103. After the war the ship returned to commercial service. Bad luck returned on 15th May 1934 when the ship collided with the lost of 7 lives. The last voyage ended in Southampton on April 12th 1935.

Britannic was requisitioned and deployed as a hospital ship during the war. On 21st November 1916, Britannic struck a mine (it could also be struck by a German’s torpedo) in the Kea Channel, Aegean Sea. The Britannic began to sink like Titanic but at 4 years later.

Between Nov 2011 and Apr 2012, a Titanic exhibition was shown in the Art Science Museum - MBS. I was given the opportunities to provide several one-hour guides to the visitors. Judging from the grand setting, I do not think MBS was making money despite that the charges was $28 per head. However, since MBS was, and is still making big money from gambling business, it makes sense for the MBS management to contribute some money back to the society to develop art and culture in Singapore. 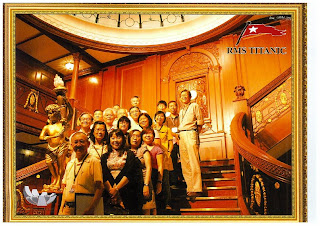 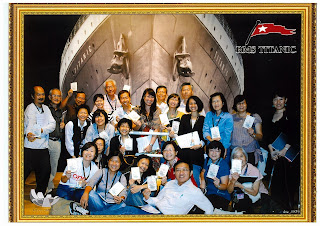 (Between Nov 2011 and Apr 2012, a Titanic exhibition was shown in the Art Science Museum - MBS. The group of docents and I posted in front of the ship model and the grand staircase. Nov 2011)

Email ThisBlogThis!Share to TwitterShare to FacebookShare to Pinterest
Labels: disaster, education, film and wayang, once upon a time, travels, 戏剧, 道德