Prime Minister Lee Kuan Yew was a strong eugenics believer. In his 1983 National Day Rally speech, he lamented that declining birth rates and large number of graduate women remaining single or not marrying their intellectual equal could shrink the Singapore's talent pool. The PAP government proceeded to launch the "Graduate Mother Scheme" to entice graduate women with incentives to get married and give birth to more babies. These could have caused a big dip in PAP's support for GE 1984. Its vote share plunged to 65%, the biggest fall and the lowest for PAP since independence. It was termed as a watershed at that time.

For this GE, PM Lee's son Lee Hsien Loong made his debut, while PAP stalwarts Goh Keng Swee and Ong Pang Boon stepped down. WP retained its sole Anson seat of leader J. B. Jeyaretnam while SDP made its first in-road into Parliament with the victory of Chiam See Tong, who would hold onto the seat for 27 years. 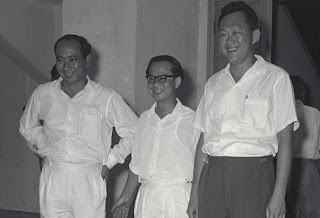 (Goh Keng Swee, Toh Chin Chye and Lee Kuan Yew)
A new Non-Constituency Member of Parliament scheme (NCMP) was introduced whereby between three and six seats would be offered to unsuccessful opposition candidates with the best scores and who garner at least 15% of the votes. Opposition parties dismissed the scheme for misleading voters into thinking that they could have opposition MPs without voting for them. WP's M. P. D. Nair was eligible for NCMP but declined. The offer was then made to SUF's Tan Chee Kien, who did the same.

I remembered Tan Chee Kien quite well and had good conversation with him back in my student years. He graduated from Nanyang University and was a Student Liaison Officer in Singapore Polytechnic. He was supportive of student activities. Because of his personal belief, he quitted the job in 1980 and eventually became a member of SUF (Singapore United Front). Eligible voters: 1,495,389 in 79 constituencies. Voters in 30 walkover constituencies: 550,765 (36.8%). Total voters in 49 contested constituencies: 944,624 (63.2%). WP contested in 15 constituencies and won 1. BS contested 4 seats and lost all. SDP contested 4 seats and won 1. PAP 64.8%. WP 41.9%. BS 38.2%. SDP: 46.1%. 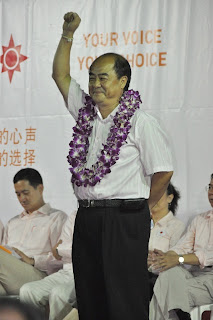 (Tan Chee Kian. Student Liaison Officer turned business man. He contested under SUF and later NSP)
GRCs were introduced in GE 1988 to ensure ethnic minority representation in Parliament based on PAP’s theory. This was the last time Prime Minister Lee Kuan Yew led the PAP in a GE. Another two stalwarts, former Deputy PM Toh Chin Chye and Senior Minister S. Rajaratnam, retired for PAP's renewal process. Singapore was divided into 13 GRC and 42 single member constituencies (SMC). Two seats were vacated in 1986 - Anson of WP chief J. B. Jeyaretnam and Geylang West of PAP Teh Chang Wan. Jeyaretnam disqualified as MP for improper party accounts and Teh Chang Wan committed suicide while on investigations for corruption. WP absorbed BS and SUF to become the largest opposition party and also allied with PKMS as one common unit.

Former solicitor-general and Law Society president, Francis Seow, standing under the WP ticket in Eunos GRC with veteran politician Lee Siew Choh. Francis Seow came under fire from the PAP leadership for his alleged dubious financial circumstances. Nevertheless, the strong WP team caught PAP's attention and Dr Tay Eng Soon, a popular PAP stalwart, was switched to face the team. In the end, PAP won the GRC by narrow margin (50.9%). With SDP's sole victory, two NCMP seats were offered to Lee and Seow. Seow fled the country to avoid arrest and was disqualified from the post. Lee Siew Choh took up the offer and became Singapore's first NCMP. This also marked his return to Parliament after 25 years since his last stint as a PAP and BS legislator. Eligible voters in 81 constituencies: 1,669,013. Voters in 11 walkover constituencies: 219,175 (13.1%). Total voters in 70 constituencies: 1,449,838 (86.9%). WP contested in 32 constituencies and lost all. SDP contested 18 seats and won 1. PAP 63.2%. WP 38.5%. SDP: 39.5%. 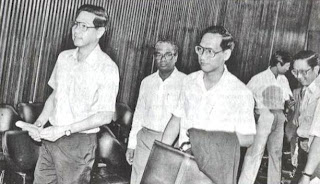 ('Of the five younger Cabinet ministers - Ong Teng Cheong, Goh Chok Tong, Dhanabalan, Tony Tan and Lim Chee Onn - whom have you the most confidence in?' Mr Lee asked some members of the already disbanded task force in a confidential letter in April 1981. Ong Teng Cheong is on the left and Lim Chee Onn is third from left.)
In November 1990, the Nominated MP scheme was implemented to introduce non-partisan voices into the parliament. GE 1991 was Prime Minister Goh Chok Tong's maiden leading of PAP into an election after Lee Kuan Yew stepped down as PM and PAP's secretary-general in 1990. PM Goh called a snap election merely three years after the last GE to court a fresh mandate, setting Parliament's shortest term ever. The nation was regrouped into 15 GRC and 21 SMC. However, PAP lost an unprecedented four seats, the biggest number since GE 1963, and its vote share fell for the third consecutive time. SDP won two more seats in addition to the seat retained successfully by leader Chiam See Tong. In fact eight out of nine SDP candidates came in among the top ten opposition candidates. WP made its second in-road into the legislature with the victory of its organising secretary Low Thia Khiang, who would years later become WP secretary-general and leader. At a press conference, PM Goh attributed the loss to his "open and consultative style of government" and pledged to re-assess his style. 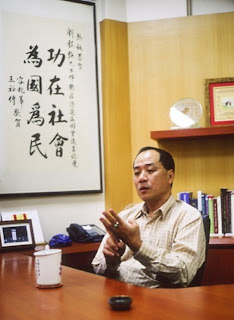 (Low Thia Khiang. Elected as Hougang MP in 1991. 20 years alter, he decided to walk out from Hougang and formed an 'A' team contested in Aljunied GRC in 2011. The team garnered about 56% vote share)
Since the introduction of the NCMP scheme in 1984, this was the first GE with no NCMP seats offered as the four opposition seats exceeded the minimum of three NCMP seats allotted. Therefore, the narrow defeat of WP's Eunos GRC team, helmed by Lee Siew Choh again, did not see to his return as NCMP. He retired from politics in 1993. The maximum of six Nominated MPs were appointed for this term, up from two NMPs previously. Eligible voters in 81 constituencies: 1,692,384. Voters in 41 walkover constituencies: 844,668 (49.9%). Total voters in 40 constituencies: 847,716 (50.1%). WP contested in 13 constituencies and won 1. SDP contested 9 seats and won 3. PAP 61%. WP 41.1%. SDP: 48.6%.

The first and only by-election in a GRC was called by Prime Minister Goh Chok Tong in his own Marine Parade GRC in 1992 for two purposes. He hoped to secure another fresh, stronger mandate after last year's GE saw PAP lose an unprecedented four seats under his leadership. He also wanted to introduce Teo Chee Hean into the parliament. SDP unveiled its newly-acquired "trump card" - National University of Singapore lecturer Chee Soon Juan, who would subsequently become SDP's leader. 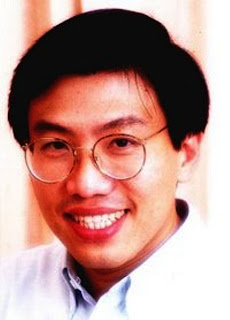 (Chee Soon Juan, a NUS lecturer who was under attacked by the PAP heavy weight. c.1992)
GE 1997 was another opportunity for Goh Chok Tong to score a better mandate after PAP's considerably poorer showing in GE 1991. Singapore was regrouped again into 15 GRC and 9 SMC. Two seats in PAP-held Eunos and Toa Payoh GRCs were vacated after the death of Dr Tay Eng Soon and inauguration of former Deputy PM Ong Teng Cheong as Singapore's fifth and first elected President respectively. Eunos GRC, which twice saw narrow wins against WP, was dispersed into neighbouring constituencies. The main opposition SDP was facing serious internal conflict. SDP MP and former leader Chiam See Tong won a defamation lawsuit against his party's central executive committee, including its new leader Chee Soon Juan and one of its MPs, chairman Ling How Doong. Prior to nomination day, Chiam resigned from SDP and crossed over to its splinter party, SPP.

Two opposition candidates who came under heaviest fire from PAP were Chee Soon Juan and Tang Liang Hong. Tang was standing on the WP ticket with its secretary-general J. B. Jeyaretnam in Cheng San GRC. Tang was accused by PAP of being an anti-Christian Chinese chauvinist. After the GE, Tang fled Singapore after numerous lawsuits were filed against him by top PAP leaders, including PM Goh Chok Tong, Senior Minister Lee Kuan Yew, DPMs Lee Hsien Loong, Dr Tony Tan and several PAP MPs. 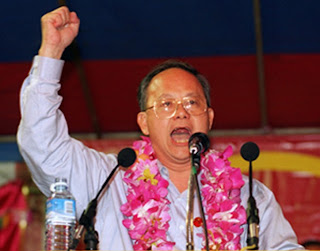 (Lawyer Tang Liang Hong during GE rally. 1997)
With the "HDB upgrading" carrot dangled as a pricy stake for voters, PAP reversed its electoral decline for the first time in four GEs and recaptured two SDP seats out of the four it had lost the last round. With Chiam hopped to SPP, SDP had no representation in Parliament since 1984. Low Thia Khiang, now WP assistant secretary-general, and Jeyaretnam as a NCMP, returned to the legislature. It was Jeyaretnam’s first return to parliament since his last presence in 1986.