This is an article published in the New Straits Times, Malaysia on April 3rd, 2013.

Datuk Dominic Puthucheary was arrested and detained under Operation Coldstore (Feb 2, 1963) before the merger of Singapore and Malaya. In 2011, Dominic's son Janil Puthucheary stood as a PAP candidate in Singapore's general election and won. He had his father's blessing: "The differences we had with the PAP no longer existed -- on merger, anti-colonialism, the Internal Security Council."
-------------------------

NOTHING PERSONAL: Despite detentions and banishment, Datuk Dominic Puthucheary tells Santha Oorjitham that it was all about ideology


"I AM now relooking at Malaysian history outside the Cold War and colonial perspective, particularly the Emergency," says Datuk Dominic Puthucheary at the end of an interview at his law firm.

He has been doing this for the past two decades. And at many of the country's turning points, this former trade unionist, member of parliament and political detainee, has been in the thick of the action.

Born south of Cochin in Kerala, India on May 27, 1934, Dominic moved to Johor Baru when he was four months old.

In 1951, while Dominic was studying at the Johor English College, James was detained during a meeting of the nationalist Malayan Democratic Union. Dominic's classmate S.T. Bani later told former Singapore premier Lee Kuan Yew, who had started his career as a lawyer, about Dominic.

"They both came to Johor Baru and took me for satay and mee rebus at the stall owned by Wahab, James' contemporary at the English College."

Lee was looking for cadres and "was very impressive and charismatic. I decided I had to join him. At that time, merger with Malaysia was uppermost in our minds as part of the nation-building process".

Bani and Dominic became active in the unions. By the mid-1950s, Puthucheary was studying at the Singapore Teachers' Training College. At a protest meeting, he made an anti-colonial speech in Malay and was expelled.

He had a brief stint as an investigator with Singapore's Social Welfare Department. And in 1954, he was part of the formation of the People's Action Party, "a fascinating moment of history, of nation-building. Lee built a party that was not racially based and with very strong intellectual content".

After the detention of Legislative Assembly member for Bukit Timah Lim Chin Siong and other trade union leaders in October 1956, Puthucheary revamped the Singapore Trades Union Congress into the Trades Union Congress -- where he was labelled one of the Ten Tall Men on the secretariat. He later became assistant general-secretary of Singapore's General Employees Union and by 1961, was leader of the Singapore Association of Trade Unions (Satu).

He organised mass rallies -- for example, for visiting Algerian nationalist leader Ferhat Abbas.
"Those were very exhilarating days," he recalls.

"I felt part of the large drama of the anti-colonial struggle. Colonialism distorted our lives, self-worth, dignity and potential. We didn't have to mimic the West. We could stand on our own and be part of the larger Southeast Asia."

But, he stresses, "I saw it in terms of the entire peninsula and Singapore. We were in Singapore but our heartbeat was in Malaya".

Before Singapore's 1959 general election (when PAP came into power), Lee was looking for candidates and asked Dominic to stand: "I was a Federal citizen. He said I could change my citizenship but I said no, because I wanted to go back."

In July 1961, Dominic was one of the Big Six trade union leaders who left with 13 PAP MPs to form Barisan Sosialis where he was founder vice-president -- after losing the vote on the issue of full internal self-government and abolition of the Internal Security Council before merger with Malaysia. The breakaway group included 35 of the 51 PAP branches and 19 of its 23 organising secretaries. 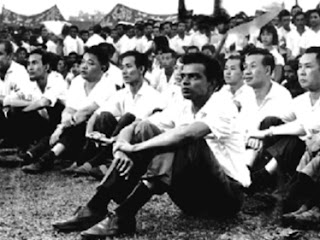 (Datuk Dominic Puthucheary (foreground) at a PAP rally in Singapore in 1962. He says he felt part of the large drama of the anti-colonial struggle,’ he says. The New Straits Times, April 3rd, 2013)

Lee cracked down on them during Operation Coldstore in February 1963, arresting 115 alleged communists and supporters. Both Dominic and James were among them.

Dominic was detained at the Outram Road prison for a few days, then moved to the central Jalan Bandar prison in Kuala Lumpur and on to prisons in Cheras, Brickfields and Sungai Besi, and finally the detention camp in Muar.

"I may be the only lawyer who has been detained in all the prisons in Kuala Lumpur!" he quips.

Despite Coldstore, in the 1963 state elections, Barisan Sosialis won 13 out of 51 seats, becoming the second largest, as well as the leading, opposition party. Dominic was released after 10 months, had to sign a pledge to quit politics and was banished from Singapore.

He headed to Queen's University in Belfast where he studied law until 1969, moving back to Kuala Lumpur in 1970 to begin practising with Skrine and Co. He married Datin Dr Savithri Puthucheary in 1971 and they have two sons, three grandsons and a granddaughter.

Meanwhile, after Singapore separated from Malaysia in 1965, Barisan Sosialis members began to resign. By 1968, there were no opposition MPs in Singapore.

For almost 15 years, Dominic focused on the law. But then, he was bitten by the political bug again.

He began giving legal advice to the fledgling Parti Bersatu Sabah in 1985 and helped them get registered in March that year.

And the following year, he joined Gerakan and became its vice-president.

"I thought I could initiate a new non-racial, non-communal political movement within the Barisan Nasional, which was all powerful," he says.

"I wanted to use that niche to expand the space and give people the choice of racial and non-racial politics."

He spent months drafting a constitution for a "Pan-Malaysia Congress of Unity" which would offer party membership, direct individual membership and affiliated membership for other organisations. Among its aims was "to strive for national unity based on Malaysian nationalism, which is based on the belief and commitment that all Malaysians should identify with Malaysia and be willing to treat each other as equals and to contribute positively to nation-building, prosperity and security of Malaysia".

In 1990, Dominic was elected Nibong Tebal MP -- and his banishment from Singapore was lifted. He started a self-respect movement, "Than Maana Iyakam", for the Indian community there and held political "school" for them on Sundays to educate them on political issues and empower them.

He also conducted studies on social issues among the Indian working class. For example, he concluded that housing on the estates made them more dependent.

"I advocated low-cost housing outside the estates so they would have independence of choice of sending their children to Tamil schools or other schools."

Dominic raised this with MIC, the Penang government and deputy chief minister Datuk Seri Ibrahim Saad, asking for state land and got it. "There were four enclaves of displaced Indians who were itinerant labour and had no coherent community. I wanted to resettle them with a critical mass so there would be shops, restaurants, businesses and schools."

There were about 15 Tamil schools in the constituency, some with only 10 to 15 pupils. He planned to reduce the number of schools. But, he said, Gerakan president Tun Dr Lim Keng Yaik asked him, over lunch in 1993, to move to Selayang in the 1994 polls.

Disillusioned, Dominic left Gerakan just before the elections and focused on his law practice. His memories of Singapore's early days were revived when he was interviewed for Men in White: The Untold Story of Singapore's Ruling Political Party.

And at the launch of the book in 2009, he met Kuan Yew for the first time since he was banished in 1963.
"I hoped for more time but it was a very short exchange of pleasantries," he says.

"I was asked about my 'reconciliation' with him at the launch. I was jailed but that's the price I had to pay for what I believed. I did not consider it a personal issue." 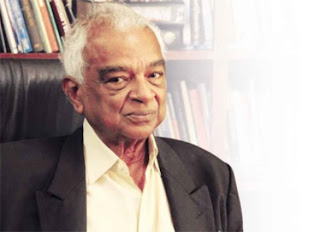 (Datuk Dominic Puthucheary believes colonialism ‘distorted our lives, self-worth, dignity and potential... We could stand on our own and be part of the larger Southeast Asia’. The New Straits Times, April 3rd, 2013)

In 2011, Dominic's son Janil stood as a PAP candidate in Singapore's general election and won. He had his father's blessing: "The differences we had with the PAP no longer existed -- on merger, anti-colonialism, the Internal Security Council."

Dominic has accepted that there are new realities. And, he sums up, "To live in the past would be absurd".

Email ThisBlogThis!Share to TwitterShare to FacebookShare to Pinterest
Labels: general election, humanities, once upon a time, 人文, 政治, 殖民地, 道德