Watched THE LEAP YEARS played by Wong Liling, Joan Chen, QiYuWu and Ananda Mathew Everingham. It is a Singapore's love story based on a novel by Catherine Lim. The story talks about a young Singaporean girl having chance upon her special someone on 29th February. She decides to base her intuition on an Irish leap year tradition that no man will refuse any request of a lady and invites him out for a date. Together, they embark on a romantic journey that spans over 12 years, meeting only thrice in 12 years, on the leap year. 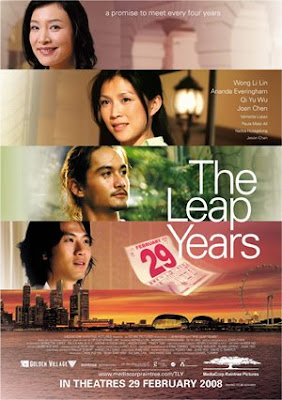 THE LEAP YEARS was one of the best local films I have seen so far. The film is not up to the standard of a Hollywood nor a Hong Kong movie. But the story is engaging based on modern sensibilities. The English is natural and real which has moved away from Jack Neo's singlish dialect comedy. THE LEAP YEARS would probably capture some of the fascinating sensibilities and the essence of life in contemporary Singapore.

It happens that the Taiwan president's election also falls into the leap years. Today is the fourth direct election for the President of Taiwan. Either Democratic Progressive Party (DPP) candidate Frank Hsieh or Kuomintang (KMT) nominee Ma Ying-jeou will end the Ah Bian's era. 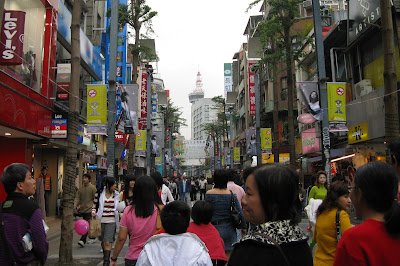 Still remember quite well how Ah Long's rather comical way of laughing over himself for how naive he was in those younger days. He was a supporter of the Green Pan. The day that he received his pay envelop, he rushed to listen to the DPP speech and accidentally dropped his full month salary into the collection box. Apart from staring at the envelop being covered by more and more cash, he couldn't do any thing extra. He went home to ask for pocket money from his mother. They scolded him for gambling. No one believed him that he had accidentally "donated" his monthly income to the Green Pan. 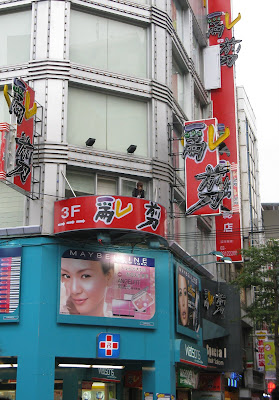 Who is Ah Long? He is not the Loan Shark. He is the tour guide that helped me to explore Taiwan based on modern fascinating sensibilities. He even pointed to a shop at XiMengTing(西门町), saying that was where the great pretty LinQingXia(林青霞) was discovered and started her big screen career. True of false? probably only Lin would know better. Nevertheless with Ah Long, my recent tour of Taiwan was a memorable one.
Posted by ....... at 3/22/2008 02:06:00 pm

Email ThisBlogThis!Share to TwitterShare to FacebookShare to Pinterest
Labels: film and wayang, travels