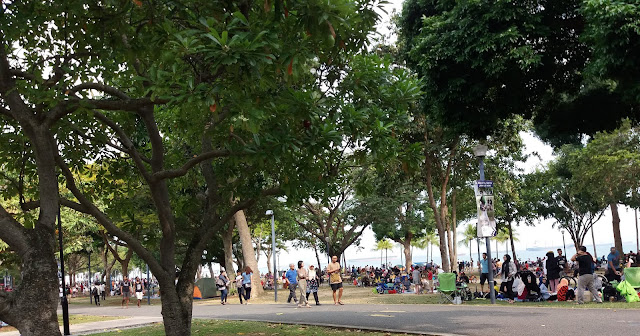 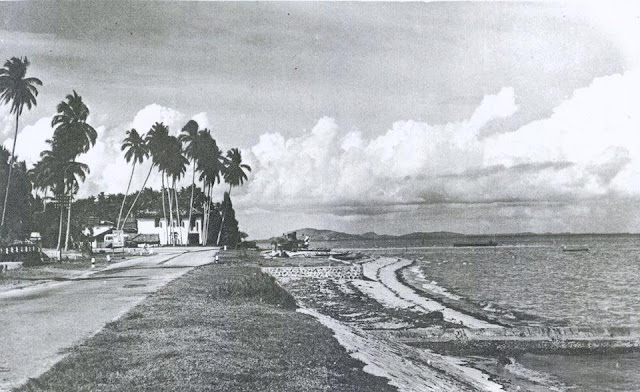 River of Life – We & Singapore

This article was written for the purpose of River of Life: Singapore River Exhibition (生命之河——新加坡河), 2 December to 31 December 2019 at library@esplanade.


Singapore River is a 3.2km waterway stretching from its mouth to Kim Seng Bridge. The river serves as the heart and the main artery of the island, providing a lifeline for almost 200 years even up to today.

The first transformation: Temenggong village and swampy land at the Singapore River’s mouth evolved into lighter trades, supporting the Singapore economy for over one and a half century.

The second transformation: After a massive clean-up, the once busy Singapore River was converted into riverside dining and entertainment.

1299 The ancient Temasek was named Singapura (“Lion City” in Sanskrit) by Sang Nila Utama when first set foot on the island.

1823 The first quay on today’s Boat Quay was constructed.

1832 Singapore displaced Penang as the capital of Straits Settlements. The port attracted thousands of migrants from China, India, Malay Archipelago and other parts of Asia.

1840s Shipping activities were concentrated at the mouth of Singapore River and along the crescent-shaped Boat Quay. A supplementary trading area was established at the Rochor and Kallang rivers to help ease initial congestion.

1860s The Singapore River was heavily congested as three-quarters of Singapore’s shipping business was conducted in Boat Quay. Wharfs were built at Tanjong Pagar (the New Harbour) to ease shipping demands in the river.

1869 The opening of the Suez Canal increased Singapore’s importance as a centre of the expanding trade between the East and the West.

1890s Warehouses, rice mills, sawmills, boat yards, and an assortment of other trades flourished along the river.

1930s The areas closer to the upper reaches of the river were heavily industrialised with warehouses and shophouses. For example, Tan Kah Kee established his company Kiam Aik to deal in rice and later rubber at the junction of Coleman Bridge and River Valley Road.

1972 The first container berth at Tanjong Pagar was operational. As Singapore was moving into the direction of being a container port, the centre of focus was shifted to Tanjong Pagar.

1977 A master plan for cleaning up Singapore River and Kallang Basin was drawn.

1987 The stone-walled banks of the river were repaired and new buildings and hotels were constructed. Old-time riverine and quayside businesses gave way to modern life style. 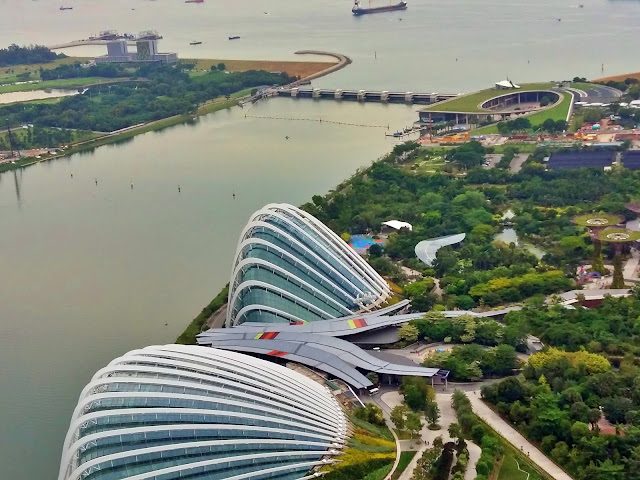 (Marina barrage at the far end, seperating the open sea and the reservoir in the city. )

When the British arrived in Singapore in 1819, the Orang Laut, or sea people, were already settled around the river mouth. About 20 gambier plantations in Singapore were run by Chinese and Malays.

As the name suggests, Orang Laut lived by the sea. Small sampans doubled up as their living quarters and transport.

“At the time when Tuan Raffles came, there were under one hundred small houses and huts at the mouth of the river…About thirty families of Orang Laut also lived in boats a little way up the Singapore river at the wider part. About half of the Orang Laut lived ashore and half in boats….There were a few Malays who lived near, their huts facing the sea…The men that lived in boats were the first to see Tuan Raffles coming. I remember the boat landing in the morning. When they landed, they went straight for the Temenggong’s house.”

---Wa Hakim, an Orang Laut eyewitness to the Founding of Singapore in 1819.

From lighter trades to reservoir in the city

In 1823, offices, warehouses and jetties were built along Boat Quay. With economy thriving, subsequent developments continued up-river near the source of the Singapore River at Alexandra Canal.

At that time, Singapore’s main exports relied on silk, porcelain, tea and rice from China; spices, coffee and gold dust from the Celebes; pepper, ironware, cotton and textiles from other parts of Asia. Gambier and opium trades dominated the river economy by the mid of the 19th century.

The influx of immigrants and growth in trade had consequently polluted the river. Early industries set up by Singapore River also played a part. These industries include preparation of nipah leaves for cigarette wrappers, gambier processing for the tanning and dyeing industries, sago production, seaweed processing and etc. 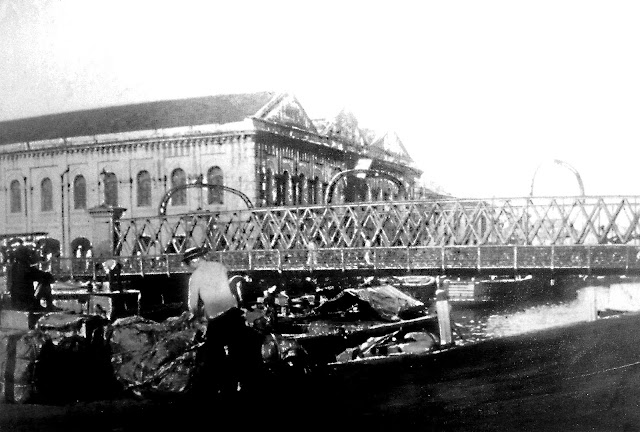 In its heyday in the 1950s, there were more than 3,000 lighters operating on the river. About 300 lighters plied along the Singapore River even when the lighter economy was dwindling. Riverine activities such as boat building and repairs were also found at the upper reaches of the river. Waste, oil spills and wastewater from these boats also added to the river pollution.

The rivers clean-up master plan was formalised back in 1977.  The master plan also focussed on changing people’s way of life in order to remove the sources of pollution. For Singapore River, it involved the relocation of about 4,000 squatters into public housing, along with hawkers and vegetable sellers moving into hawker centres. Cleanliness was restored after 10 years of massive work.

The Marina Barrage, a new addition to the city life, was completed in 2008. The barrage provides water storage, flood control and recreation. Singapore River, alongside Kallang River and Rochor River, has turned into one of the 17 reservoirs in Singapore today，providing 10% of Singapore’s water consumption.

The Chinese-crewed lighters plying the Singapore River are called “twakow”. They first appeared on the river in the second half of the 19th century. By 1900, they had displaced the “tongkang” as the vessel of choice for transporting cargoes to and from oceangoing ships anchored in the harbour.

Influenced by traditional Chinese designs, the squat-looking craft had a wide hull with an almost flat bottom designed for carrying heavy loads in shallow waters. Their colour schemes followed those Chinese junks in the Qing Dynasty era. The bows of these boats were painted in red or green, each with a pair of fish eyes to ensure safe journeys. The bows from the Guangdong province (including Teochew) were red and those from the Fujian province (Hokkien) were in green.

For those single twakowmen, lighters were better place to stay than the cramped cubicle or duckling bed in a “coolie keng” (coolie lodging house). They cooked, bathed and slept on their lighters. Some lightermen would prefer to live outdoor under Read Bridge. 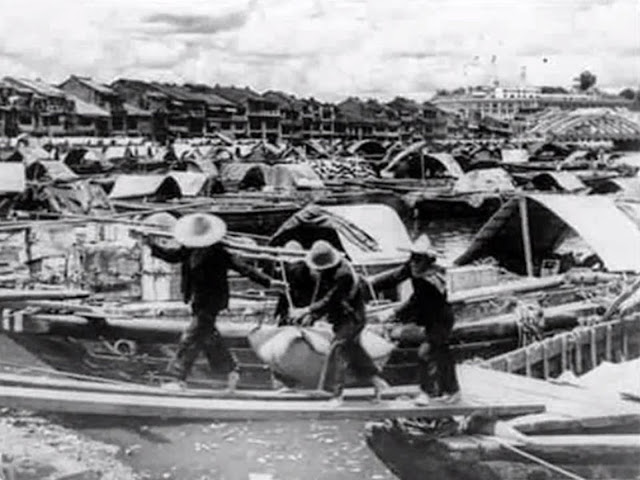 (Coolies working together to carry a heavy object to shore. c.1950s. Source: Internet.)

Singapore stone once stood at the river mouth

The Singapore Stone with undecipherable inscriptions is a proof of Singapore’s ancient beginnings. The stone was discovered at the river mouth in 1819 during the reclamation of the swamps. In 1843, it was blown into fragments to widen the mouth of the Singapore River, and make space for fort and living quarters. One of those pieces is shown in the National Museum of Singapore.

The slab may be linked to the legendary story of the 14th-century strongman Badang, who is said to have thrown a massive stone from Fort Canning Hill to the mouth of the Singapore River. 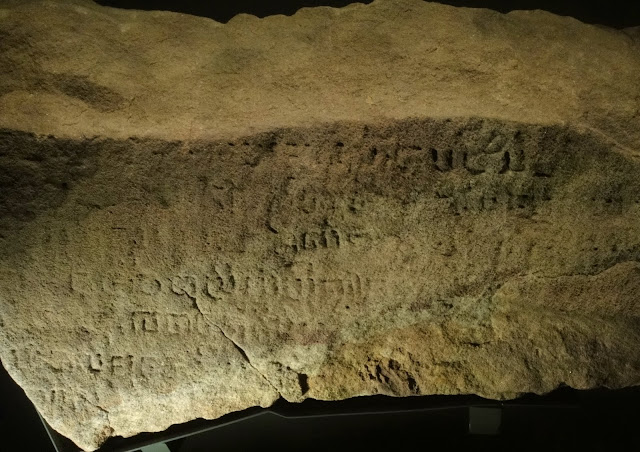 (The Singapore Stone is a  large slab, which is believed to be dated even before the 14th century, bearing a still undeciphered inscription.)

There are 12 bridges lining from the upper reach to the mouth of Singapore River. Collectively, they tell the story of the growth of Singapore.

The Elgin, Cavenagh, and Anderson Bridges which stood at the Singapore River's historic mouth for decades, are collectively gazetted as Singapore's 73rd national monument.

The bridge was named after Lord Elgin, Governor-General of India in 1862 when an iron bridge was replacing an older wooden bridge. The current bridge was built in 1929.

Cavaliere Rudolfo Nolli, an Italian sculptor, made the cast iron lamp posts and decorative lion medallions on the bridge. His sculptures can still be seen outside the Bank of China Singapore Branch, Crawford Bridge and the façade of the old Supreme Court which converted into the National Gallery of Singapore. 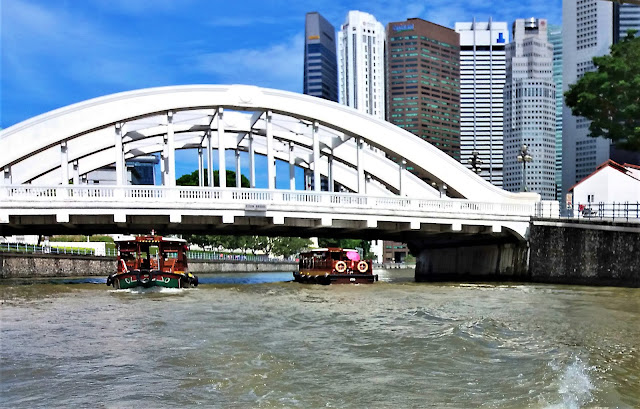 Cavenagh Bridge was erected in 1869 to celebrate the 50th anniversary of the founding of Singapore. It is one of only two remaining bridges in the world built with the "Ordish-Lefeuvre system", a type of modified cable-stayed bridge design (the other is the Albert Bridge in London). Unfortunately, the bridge was designed without sufficient height allowance that enabled vessels to pass under it. It gave birth to the lighter industry.

The bridge was the last major project undertaken by Indian convict labours who were deported to Singapore for half a century.

There are antique signs at both ends of the bridge prohibiting "any vehicle of which the laden weight exceeds 3 cwt and to all cattle and horses". 3 cwt is around 150kg. 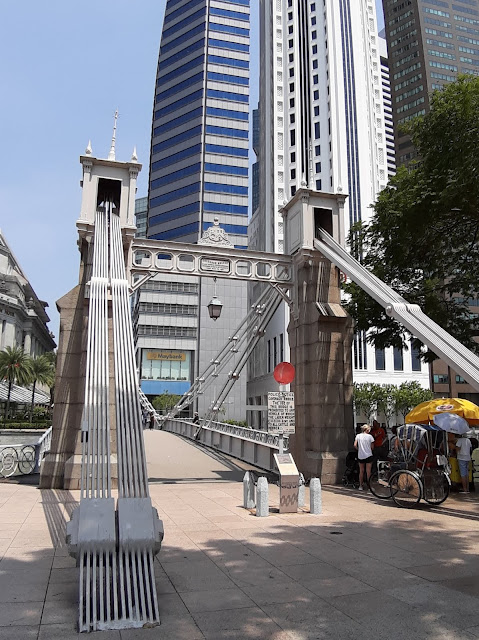 By the turn of the 20th century, Singapore was enjoying a measure of economic success. This placed pressure on existing infrastructure including bridges.

Anderson Bridge, the first steel bridge in Singapore, was built in 1910 to cope with growing traffic in the city.

During World War II, Japanese soldiers used to display the severed heads of suspected spies and criminals on the steel arches of the bridge. The gruesome sight serves as a warning to those defiant toward Japanese rule. 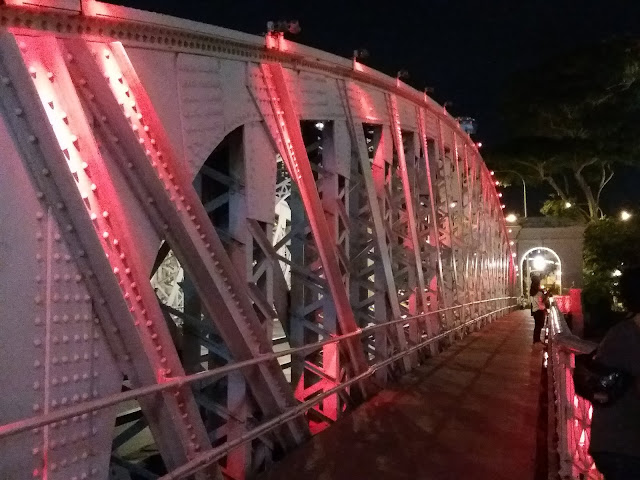 Sluice gates still exist at the South bank of Boat Quay between Elgin Bridge and Cavenagh Bridge. In the past, the sluice gates had to be manually closed during high tide. Otherwise the river would flood the nearby low-lying areas such as Carpenter Street and Hong Kong Street. When the tide is low, the sluice must be opened to allow water from the drains to flow into the river. 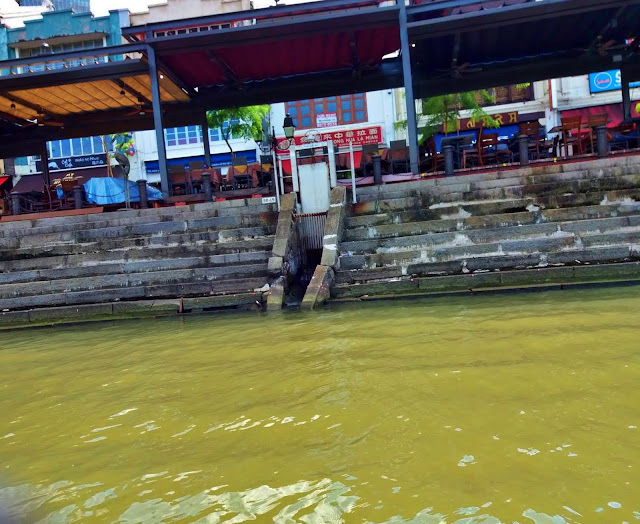 (Sluice gate at the South bank of Boat Quay.)

The locals called the bridge Malacca Bridge, given its proximity to Kampong Malacca at Clarke Quay vicinity. True to its nickname, this place was initially designated as a kampong for the Muslim community.

Read was a British merchant, credited for helping to mediate a major conflict between the Hokkien and Teochew communities in the mid-1850s.

However, Read Bridge is best known as a location where Teochew storytellers would entertain the coolie crowds in the evenings, telling stories for a fee.

The storyteller would ignite an incense stick, sitting next to a wooden box with a gas lamp. Traditional culture and values were transmitted to coolies through story telling. These incense sticks were particularly thin and would burn out in less than 15 minutes. At this time, the story was usually nearing its climax and was too exciting to call for a halt. The crowd would not hesitate to pay to continue with the story. It is a lost scene of yesteryear. 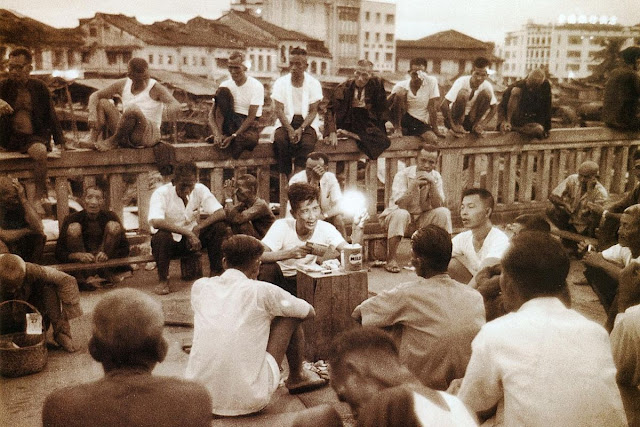 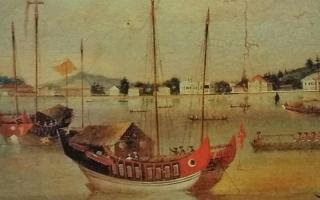 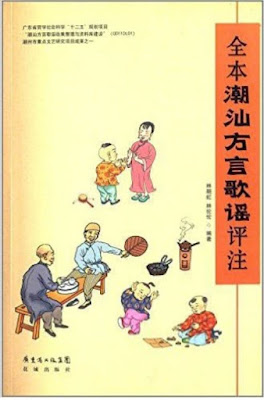 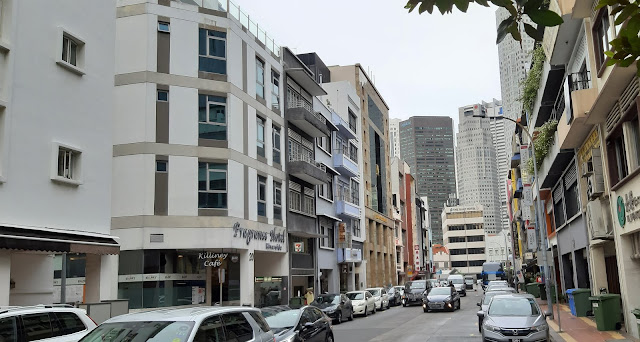 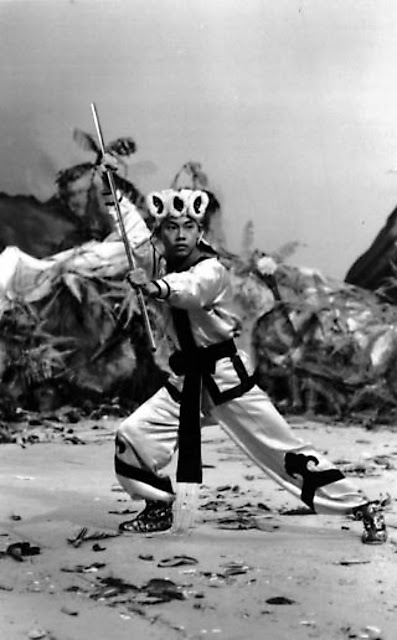 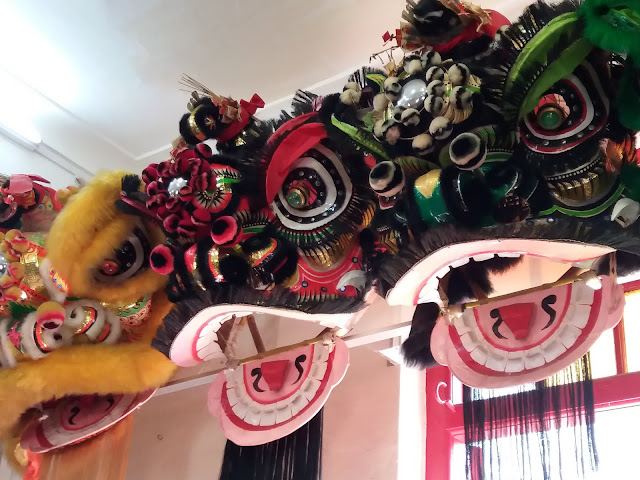 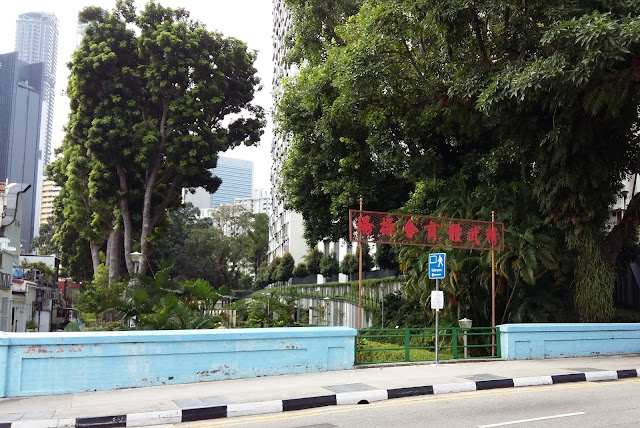 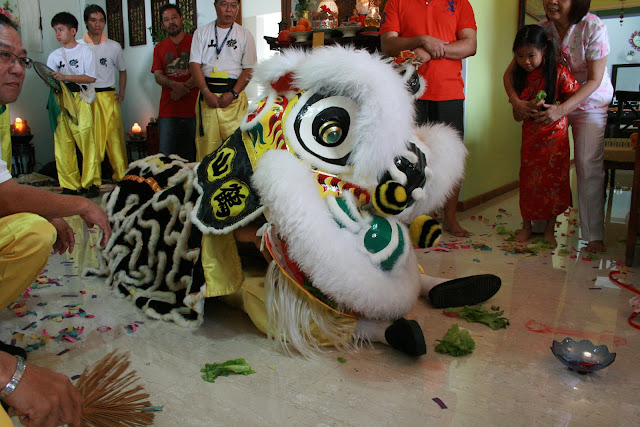 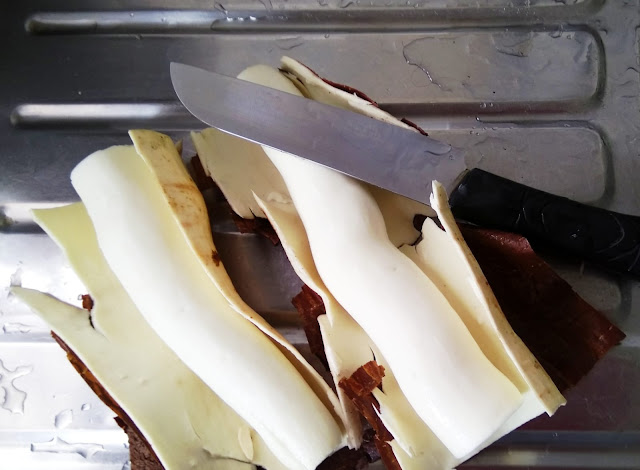