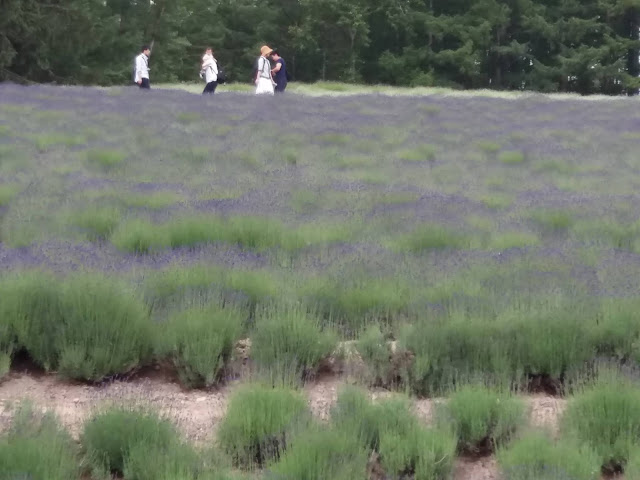 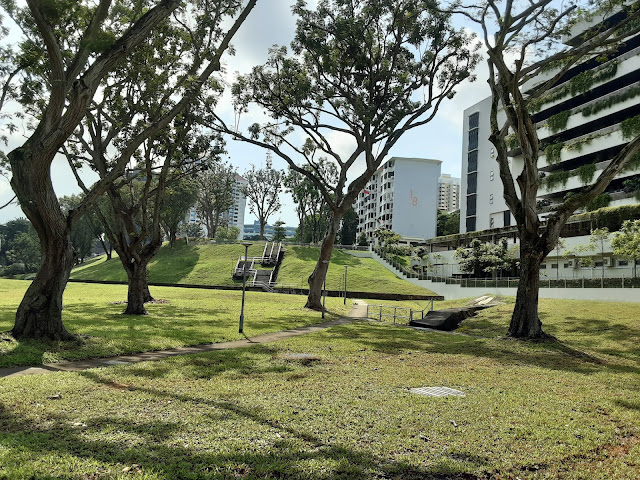 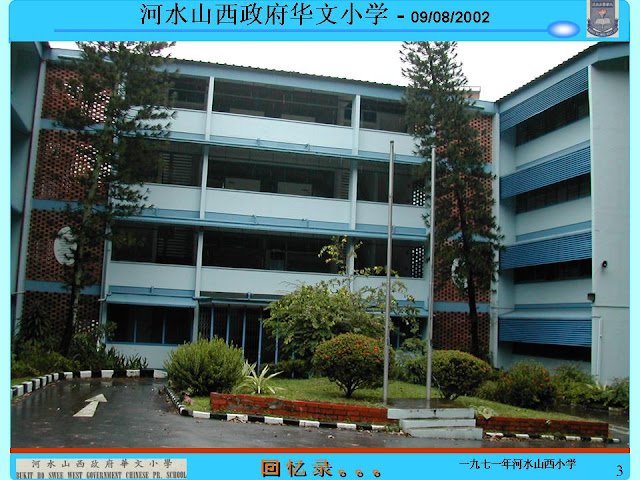 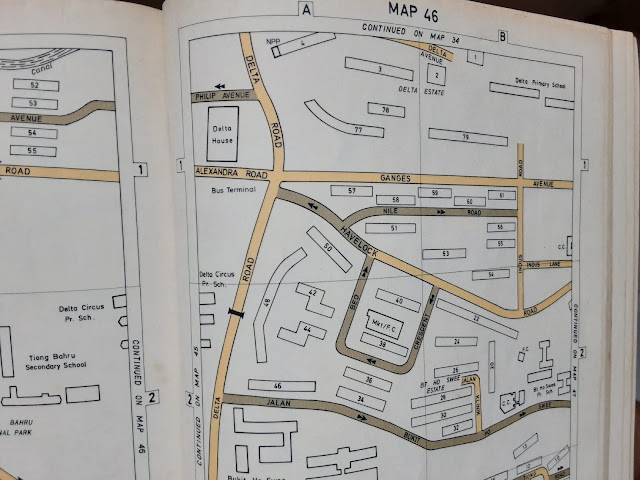 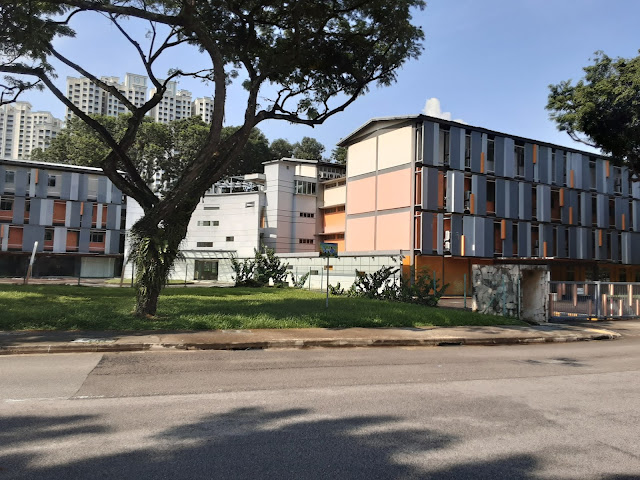 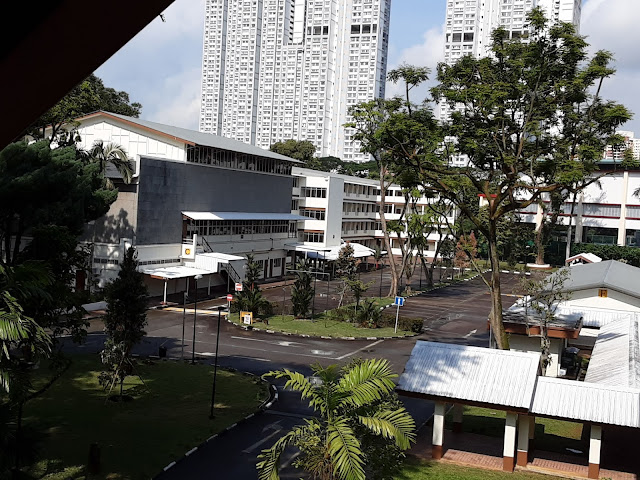 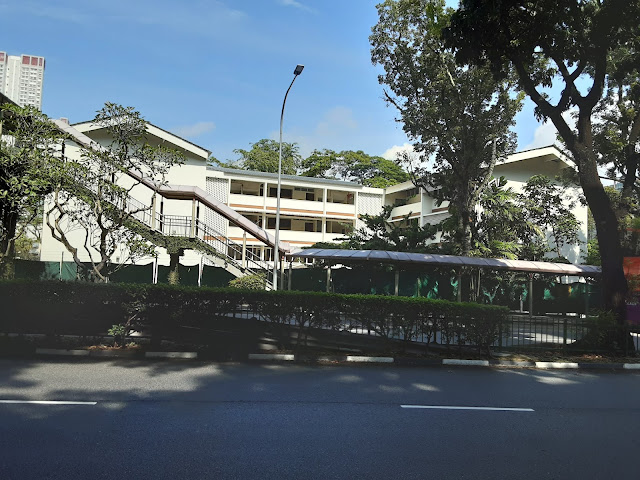 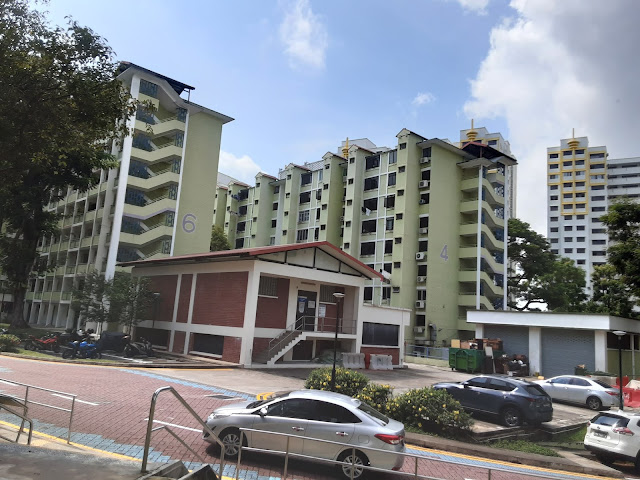 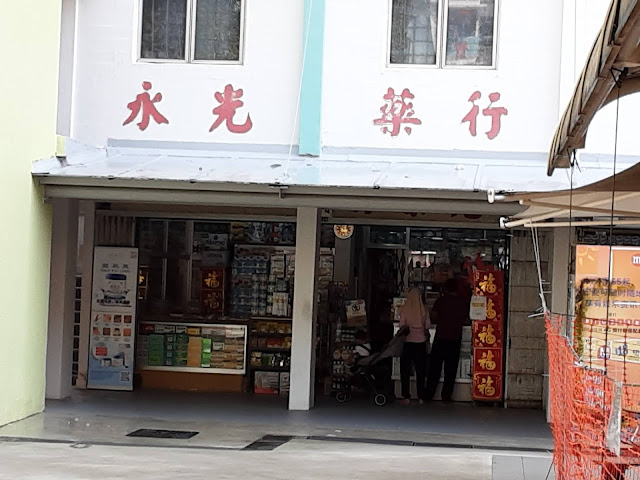 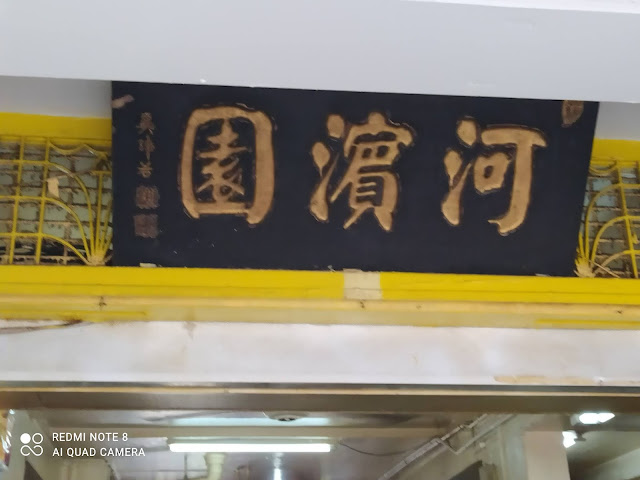 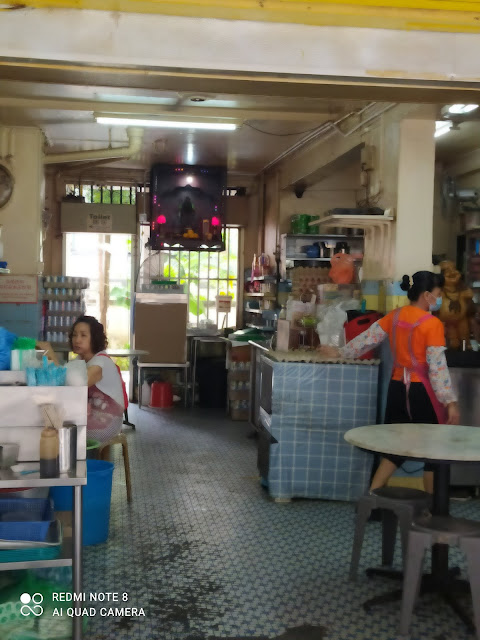 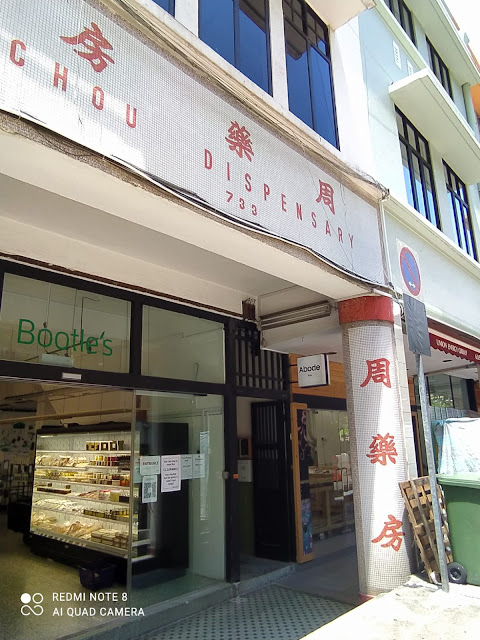 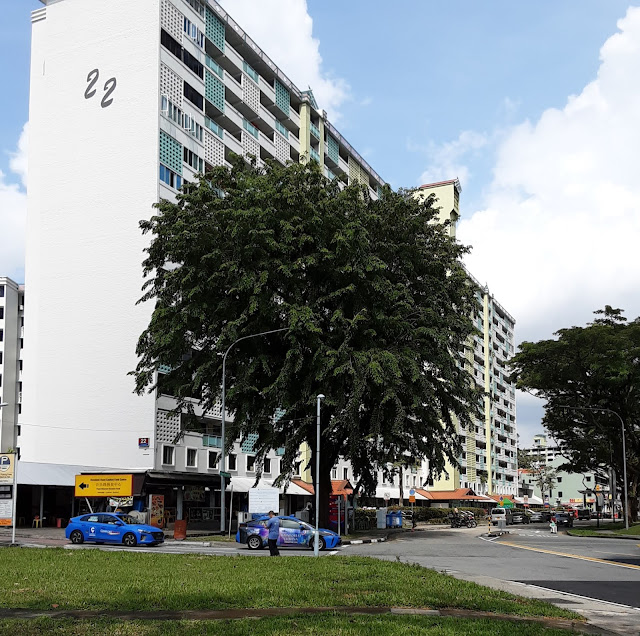 The Singapore ship series currency notes (1984-1999) is a show of maritime vessels. The front of the ship notes depict vessels that have plied the waters of Singapore over the centuries, starting with the merchant craft of bygone days, and progresses to the modern bulk carrier. The series pays tribute to the contributions of merchant shipping to the development of Singapore from an entrepot trading hub to one of the busiest ports in the world. 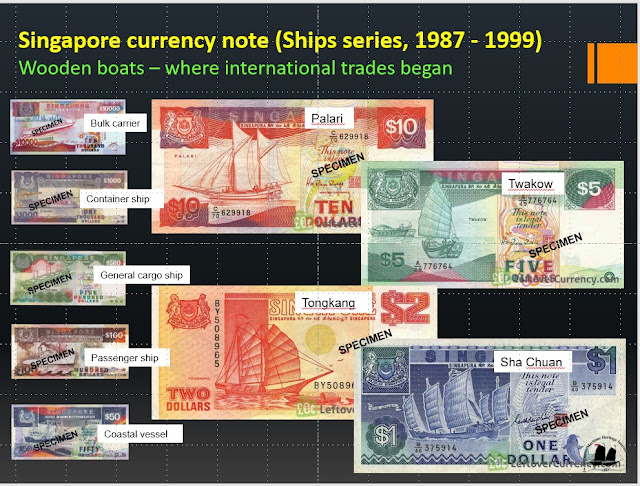 Telok Ayer, the “port” of arrival

Cecil Street and Robinson Road stand on the reclaimed land in front of Telok Ayer street since 1887. The arrival port shifted to Johnston Pier (prior to Clifford Pier, nickname Red Lantern Pier 红灯码头) and New Harbour (prior to Keppel Harbour and PSA terminals). 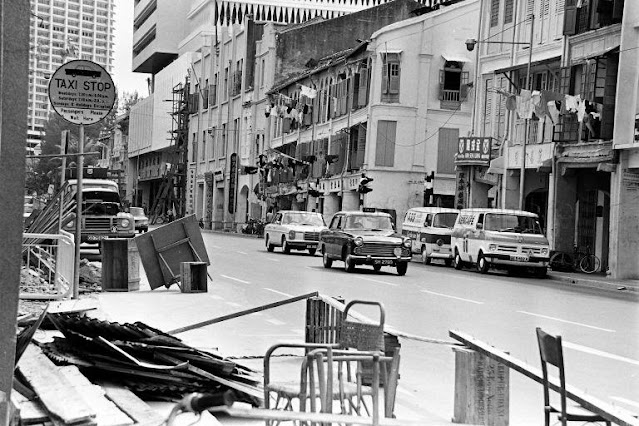 For those who took steamships and anchored outside the Red Lantern Pier, they would carry their luggage, walk down the gangway onto a transition barge, and board a bumboat to shore. Those suspected from being affected by communicable disease would arrive at St John’s Island for quarantine. 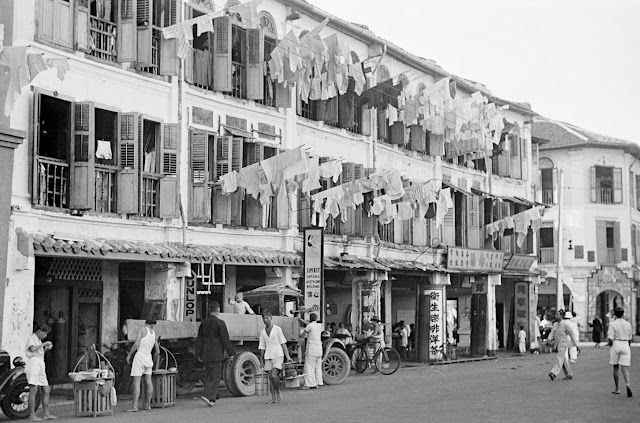 During my growing up years, Indian and Malay roadside hawkers set up stalls in the evening at both sides of Red Lantern Pier. My father and I would enjoy a cup of teh susu under the starry sky and sea breeze. Life was simple. Happiness was found in simplicity. 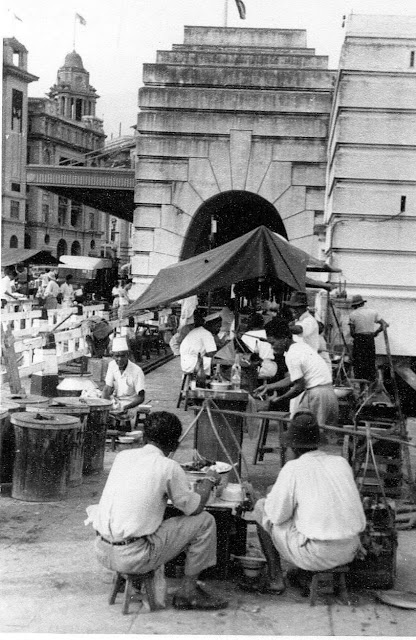 The revolving beacon from Fullerton lighthouse shone at the surrounding buildings periodically. I always admired lighthouses because they symbolise a ray of hope for seafarers. 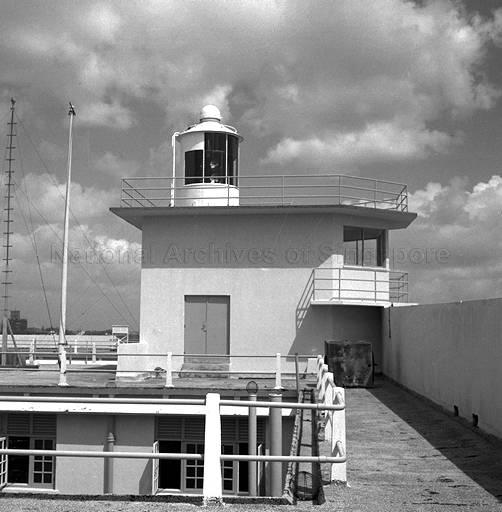 Telok Ayer Basin was next to the pier. Chinese called it No. 4 gate (四号码头). Breakwaters sheltered the basin from open sea.  The basin was a calm and safe haven for lighters. Many Hokkien coolies lived at coolie keng (coolie quarters) inside those shophouses on Cecil Street. For survival, they formed “bang” to protect their respective interest. Teochew coolies settled at Cha Chun Tau (柴船头) at the mid-stream of Singapore River where Clarke Quay is today. 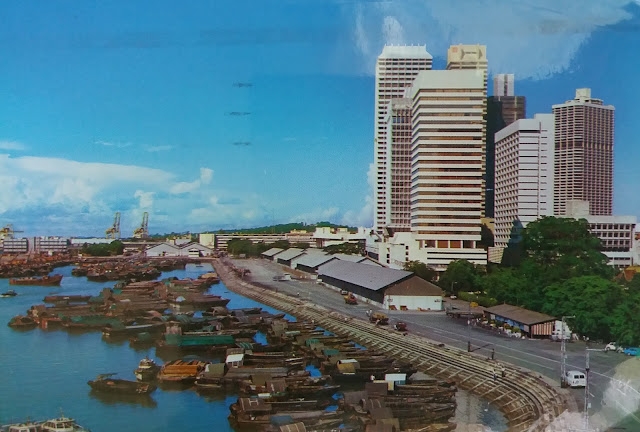 Singapore River was “colourful” in the past. It had a foul stench and was black like kopi-o during low tide. It became brownish similar to teh-c when raining. The water was adorable like green tea during high tide. That was the time for us to dive into the river.

Differences between Tongkang and Twakow

During the foundation years, Indian boat builders came with the British East India Company and built small Indian Tongkang. They were propelled using paddles and wooden poles. When Chinese business flourished in the second half of 19th century, Chinese ventured into wooden boat business and constructed larger tongkang and twakow. As tongkang grew in size, the Cavanagh Bridge at the mouth of Singapore River limited them from entering. They usually berthed at Kallang River or Beach Road near the Kallang River mouth.

Chinese tongkang has 40% more cargo capacity than the Twakow. Tongkang is about 20m length,  6m width and  4.5m depth. They have slightly rounder hull and double-ended bow influenced by South India design. They travelled international waters to Thailand, Myanmar, Indonesia either towed by tugboat or rigged with wind sails. As two-way trips would take weeks, sleeping quarters were provided for the crew.

During the Japanese occupation period, the military government ordered the boatbuilders to construct more tongkangs to transport tin, logs and other goods from Indonesia and Malaya. The Japanese set high quality standard for boat building which generated positive influence after the war.

What we usually saw at Singapore River and Telok Ayer Basin are Twakows. They are about 15m length, 5m width and 3.8m depth. They are flat bottom in order to gain useable space for cargo. I believe the ancient Chinese junks (sha chuan) designed for beaching provided some inspiration. In addition, Twakow has flat bow and stern, similar to those Chinese junks which ferried waves of China immigrants to this part of the world. Twakow operated near coast within port limit mainly because of its low freeboard. 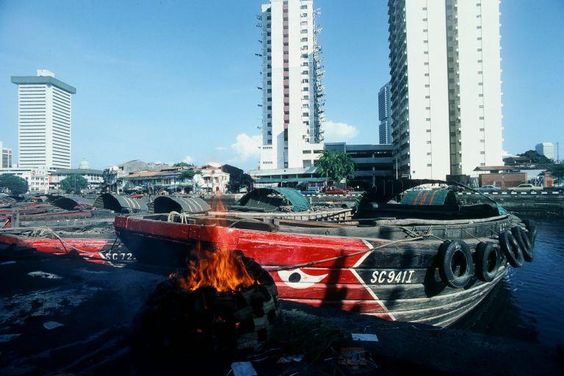 Their bows are either Red or Green.  Red for Teochew and green for Hokkien. Twakow is “tua-go” in Teochew, “tua-gor” in Hokkien. Cantonese called them “big-eye rooster” (大眼鸡) because there are a pair of eyes at the bow to recognise their ways home.

Pinisi, Parari and the Bugis and Makassarese traders

Bugis are seafarers from Sulawesi. They travelled to Singapore on their distinctive boats known as perahus.  They brought with them spices, specialised sea and forest produce gathered from the islands of the Malay Archipelago in exchange for goods. Pinisi is the latest evolution of perahus.

Makassarese traders are also seafarers from Sulawesi. They sailed with Palari from Sulawesi, a type of Indonesian sailing-vessel for transporting goods and people in the 20th century. Palari are equipped with pinisi rig which carries 7 to 8 sails on two masts. They ceased to come to Singapore after WW2. 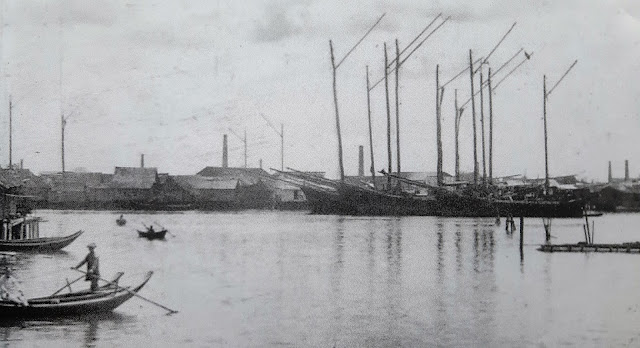 Opening of Suez Canal is an important milestone

The opening of Suez Canal in 1869 was an important milestone for Singapore maritime trade. The New Harbour at Telok Blangah was robust enough to receive large steamships. Cargo tonnage increased many times than before. Very soon, Singapore developed into a port city and became the no. 7 busiest port in the world in early 1900s. Maritime trade continues to be Singapore’s lifeline up to today. 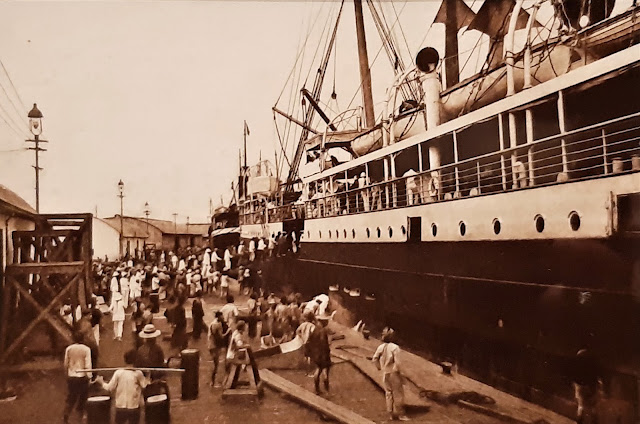 Prior to emerging into New Harbour, Telok Blangah was home to Orang Laut who came from the Malay archipelago centuries ago. It renamed as Keppel Harbour in the early 20th century and evolved into today’s PSA terminals.

With warehouses set up along the banks of Singapore River, lighters became the key asset to bridge the seagoing ships and godown by the river. Lighters played an important role in supporting the domestic economy.

The development of the Seaplane in Singapore

Seaplane, or flying boat, was an amphibious aircraft which can fly in air and sail in water. The Singapore’s seaplanes were developed for the Royal Air Force after WW1. They evolved from Singapore I, Singapore II to Singapore III in the 1930s. The Singapore III version, powered by 4 Rolls Royce engines, served as maritime patrol craft. The Royal New Zealand Air Force piloted them against the Japanese during WW2. 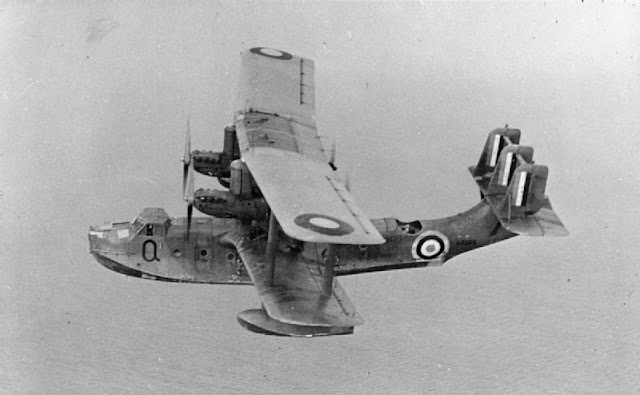 Singapore III were berthed at Kallang River within Kallang Airport premises. A slipway was constructed for them. Kallang Airport, a short distance from town, was formally open in 1937. It was branded as the best airport among UK and British colonies. It sits on Kallang Basin, home to Orang Kallang. At around late 1920s, Orang Kallang were resettled to Kampung Rokok and Kampung Koo Chai, the upper reach of Kallang River. Some moved further inland to Kampong Melayu (renamed as Jalan Eunos Malay Settlement), a new Malay kampung established by Mohamed Eunos Abdullah.

Tongkang and Twakow were built by wooden boat yards at the banks of Kallang River. There were repair shacks set up along Beach Road, under the Merdeka Bridge, as well as Pulau Saigon and Kim Seng Bridge at the upper reach of Singapore River.

Shipyards at Tanjong Rhu were more modernised and high-end. Vessels such as high-speed patrol craft, warships, launches, tankers and tugboats were built and repaired at Tanjong Rhu shipyards. The British’s Vosper Thornycroft was the most established one. By the 1980s, most of the shipyards had been relocated to Jurong as the government had begun its plan to clean up the waterways. 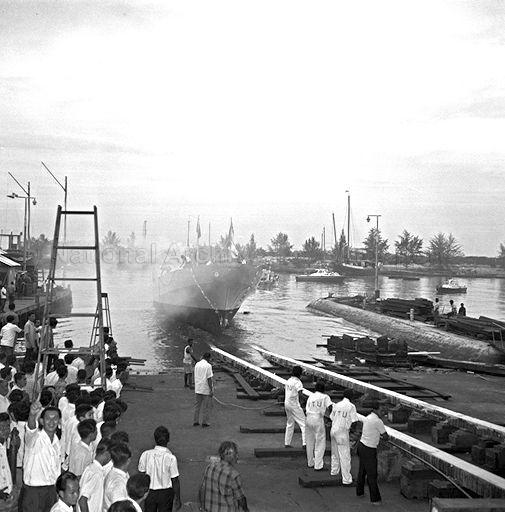 End of life for wooden lighters

Singapore had about 3,000 wooden lighters during its heyday. In 1983, there were only a few hundred of them relocated to Pasir Panjang. Today, only a few of them are left and are countable on one hand. The PSA container terminals have a great impact on those conventional lighters and made them redundant.

It is similar to when the digital cameras resulted in Kodak declaring bankrupt, and smart phones which replaces low-end digital cameras. In the 1980s, lighters waved goodbye to the once golden era. They were either sunk near Semakau island or burned into ashes on the island. 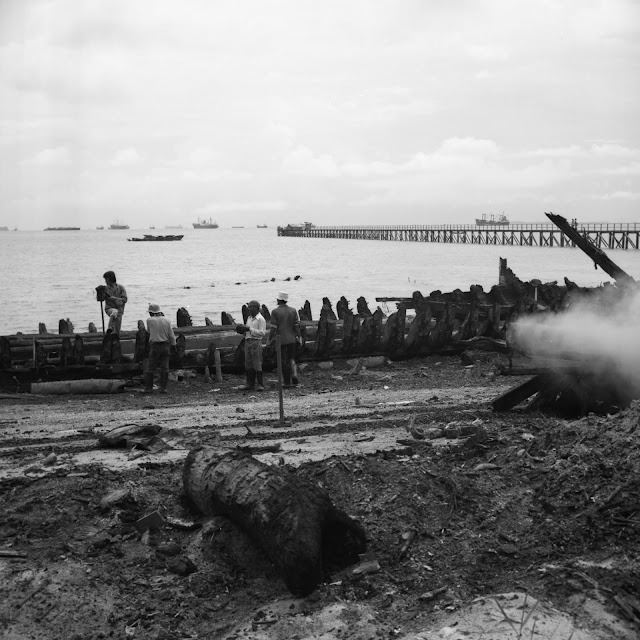 Workers inspected wooden boat at the shore of Pulau Semakau. Ashes of another boat can be seen near field. Credit Geoffrey Benjamin

When I lived in 141-B Hill Street, the coast nearby was my playing field. Large steel ships anchored outside Clifford Pier and Queen Elizabeth Walk. The reflection of light from the sea at night was like floating dragons coming alive.

I witnessed the sea beside Nicoll Highway became reclaimed lands in the 1970s. I used to jog along the vacant land in the early 1980s with my Beach Road Camp colleagues while serving my NS there. Soon after Hotel Mandarin, Pan Pacific and Oriental became the icons of Marina Square. In early 1990s, Suntec City and the fortune fountain added to the shopping arena.

In late 1960s and 1970s, land reclamation work began in Marina Bay which includes the Telok Ayer Basin. Marina Bay became one of the favourite outing spots filled with bowling alley, restaurants and entertainment. I took wedding photos in the Marina Bay Garden some 30 years back. 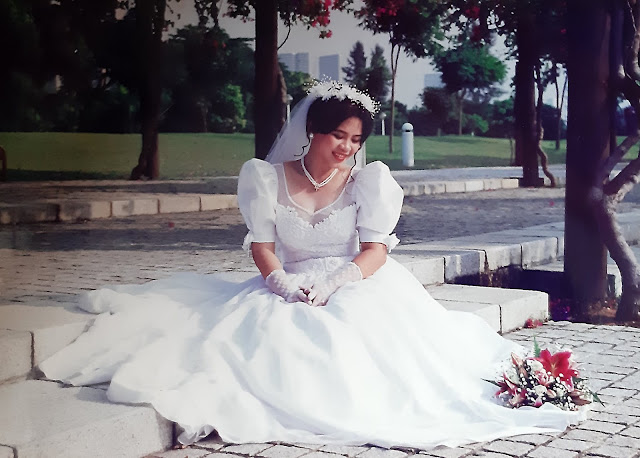 “Closure” of the old waterfront – Life is always flow

The old waterfront is now a blend of 3 rivers and the coast. The Singapore River is probably the most decorative and is always providing lifeline for Singaporean. It supported our economy for one and a half century. It turned into an entertainment hub after the waterway clean up. Since the 2000s, its role has changed into a fresh water reservoir, providing portable water to the city. 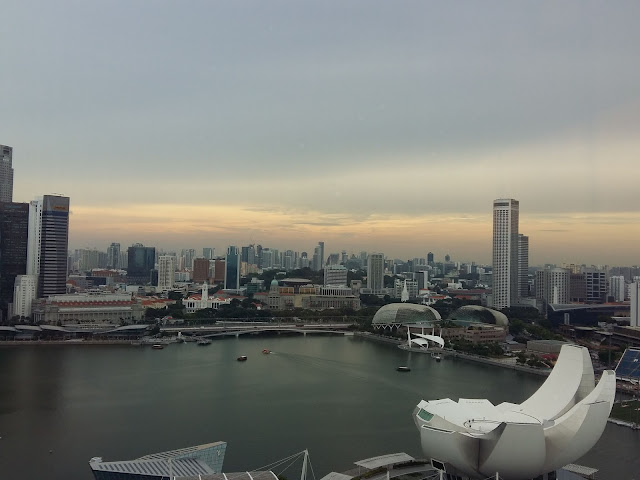 Twakows are beautiful architecture which were built without any design drawing. They are a fusion of wisdom, science and craftmanship. I do not think we can find something identical in design and construction method at other parts of the world. The combination of the river and Twakow is really Uniquely Singapore which disappeared for about 40 years.

In the name of moving ahead with time, we gain some and we lose some. Singapore River with Ellenborough Street flats in the background. The scene of Uniquely Singapore had disappeared 40 years ago.
相关链接 Links
River of Life – We & Singapore
Posted by ....... at 9/17/2021 12:30:00 pm No comments: 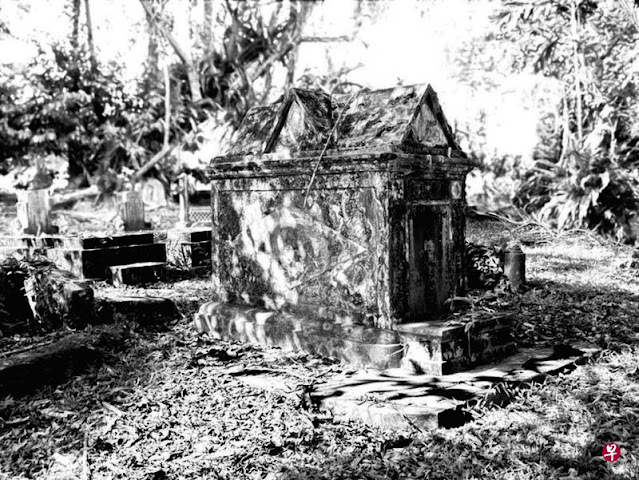