In Sweden, Riots Put an Identity in Question

Some lessons we could draw from one of the world happiest nations. Sweden is now facing growing national identity crisis. 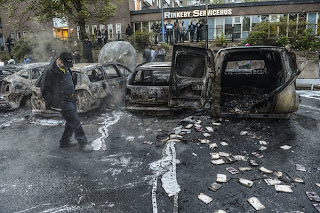 STOCKHOLM — Eva Bromster, an elementary school principal, was jolted awake by a telephone call late Thursday night. “Your school is burning,” her boss, the director of the local education department, told her.

Ms. Bromster rushed to the school, in the mostly immigrant district of Tensta, north of Stockholm, and found one room gutted by fire and another filled with ankle-deep water after firefighters had doused the flames. It was the second fire at the school in three days.

In Stockholm and other towns and cities last week, bands made up mostly of young immigrants set buildings and cars ablaze in a spasm of destructive rage rarely seen in a country proud of its normally tranquil, law-abiding ways.

The disturbances, with echoes of urban eruptions in France in 2005 and Britain in 2011, have pushed Sweden to the center of a heated debate across Europe about immigration and the tensions it causes in a time of deep economic malaise.

The riots, now subsiding, have produced less damage than the earlier ones in Paris and London, which also involved mostly immigrants. But the unrest has shaken Sweden, which has a reputation for welcoming immigrants and asylum seekers, including those fleeing violence in countries like Iraq, Somalia and Syria, and regularly ranks in surveys as one of the world’s happiest places.

“I don’t know why anybody would want to burn our school,” Ms. Bromster said. “I can’t understand it. Maybe they are not so happy with life.”

The riots are not unprecedented here. In 2008 and 2010, immigrants clashed with the police in the southern port city of Malmo. But the past week’s arson attacks in Stockholm, the capital, and the spectacle of teenagers hurling stones at firefighters have left many Swedes wondering what went wrong in a society that has invested so heavily in helping the underprivileged.

While the violence was concentrated in relatively poor districts, most of their residents have been shielded from dire poverty by a welfare system that is one of the world’s most expansive, despite recent cutbacks.

Sweden’s center-right prime minister, Fredrik Reinfeldt, scornfully described the riots as “hooliganism,” while the Swedish Democrats, a far-right party, have seized on the violence to push their anti-immigrant stance and called for the deportation of nonnative Swedes who break the law.

“This is not just a police issue,” said Jimmie Akesson, the party’s leader, but “a direct result of an irresponsible immigration policy that has created deep cracks in Swedish society.”

The left, which dominated Swedish politics for decades and devised the cradle-to-grave welfare system, has blamed reduced state benefits and a modest shift toward the privatization of public services for the unrest, pointing to an erosion of the country’s tolerant, egalitarian ethos. A recent report by the Organization for Economic Cooperation and Development said that income inequality had grown faster in Sweden than in any other industrialized nation between 1985 and the end of the past decade, although it remains far more equal than most countries.

“The rich are getting richer, and the poor are getting poorer,” said Barbro Sorman, an activist of the opposition Left Party. “Sweden is starting to look like the U.S.A.”

But Stockholm’s immigrant enclaves, including Tensta and the nearby suburb of Husby, where the riots began May 19 after the police fatally shot a 69-year-old immigrant wielding a knife, show few outward signs of deprivation.

Created in the 1960s as part of a state building blitz to create a million new homes in a decade, Stockholm’s northern suburbs now offer well-tended parks, graceless but well-maintained public housing, well-equipped schools, youth centers, libraries and legions of social workers financed by the state.

Dejan Stankovic, the Serbian-born manager of a team of government youth workers that has joined parents and other volunteers on nightly street patrols, recalled a visit to the area by a group of mystified American social workers. “They said, ‘It is green and safe, so what is the problem?’ ”

One big problem is the lack of jobs. The national unemployment rate is about 8 percent, but the rate is at least twice as high in immigrant areas and four times as high for those under 25. But, said Nima Sanandaji, a Kurdish-Swedish author of several books on immigration who was born in Iran, remote areas in the north of Sweden have more people out of work, “but they are not throwing rocks and burning cars.”

Mr. Stankovic said he was sympathetic to immigrants’ complaints of discrimination in the job market. But, he added, many job seekers, particularly young men, had unrealistic demands and expected the state to find them work in their own neighborhoods. “There are a lot of people aged from 20 to 22 who say, ‘I want a job, I want it now, and I want to stay here,’ ” he said. “This is their problem, but it becomes a government problem.”

Gabriel Bersham, a 17-year-old high school student born in Iraq, said: “Young people want to be heard but used to be ignored. Now what they say is being listened to.” But burning cars “is stupid and sad,” he said.

The anger of young immigrants has bewildered and alarmed elders in their communities. After the riot police were pulled off the streets late last week, older immigrants mounted their own effort to defuse tensions. “There is no excuse for this violence,” said Abdullah Ahmed, a teacher who emigrated from Somalia 23 years ago and now spends his nights walking the streets on the lookout for possible troublemakers.

The effort seems to be working, at least in Stockholm, where a few cars were incinerated over the weekend, down from about 50 last Tuesday. On Saturday night, the streets of Husby were quiet as young people gathered to watch a European championship soccer game on a big screen set up at the subway station.

Among immigrants, a wide generation gap exists regarding perceptions of life in Sweden. “Our parents say we should feel thankful,” said Rami al-Khamisi, a Husby youth activist whose family moved here from Iraq. “They feel thankful themselves because they lived through wars. But those of us who were born here have nothing to compare our lives with.”

Husby, Mr. Khamisi said, “looks nice on the outside, but inside it is not nice.” A first-year law student at Stockholm University who did not join in the rioting, Mr. Khamisi acknowledged that “Sweden has given me opportunities I didn’t have in Iraq,” but “I’m not treated the same as a white guy.”
“I feel discrimination all the time,” he said.

The recent violence has been a boon to the Swedish Democrats, the anti-immigration party. Opinion polls suggest the party is gaining in popularity, partly because of the indignation many Swedes feel about being called racists after accepting so many refugees. Immigrants and the Swedish-born children of immigrants make up about 15 percent of the population, and last year Sweden nearly doubled the number of asylum seekers it took in and became Europe’s primary destination for refugees from Syria.

Ms. Bromster, the school principal, whose 325 students are all from immigrant backgrounds, said families who had “escaped from terrible wars in Iraq and Syria” could not be expected to adapt easily to an entirely foreign environment. “They don’t get work, and they feel excluded from society,” she said.

But Michael Lundh, a former police officer, said, “Ordinary Swedes are sitting in front of their TVs and are getting very angry at pictures of immigrants throwing stones.” Mr. Lundh, who worked for years in an antiracism organization set up by Stieg Larsson, the author of “The Girl With the Dragon Tattoo,” said, “I’m angry, too, but this is the only way they can get the attention of politicians and the media.”

Mr. Lundh, who visited areas affected by rioting last week, said that although he had extensive experience in relatively deprived districts, he “didn’t realize so many young people hate the police” and considered them racist.