On May 16, 2012, Ngiam Tong Dow, a former permanent secretary who has served in several ministries, statutory boards and corporate boards in Singapore delivered a speech at the NUS engineering school. The next day, The Business Time published an edited version of his speech entitled “contrarian thinking for wealth creation”. Ngiam talked about the foresight of Stamford Raffles.

Thinking outside the box, Sir Stamford Raffles exchanged Bencoolen, a sliver of British colonial territory in Sumatra, for a minuscule rock out-crap called Singapore. What is it that Raffles saw in Singapore that the Dutch East Indies Company did not?

Perching on the southern-most tip of Asia, it straddles the Indian and Pacific Oceans. Its strategic geographic position was ideal for developing a free port to serve as the interchange for east-west trade and technology.

So when we see supertankers laden with crude from the Middle East sailing down the Strait of Malacca to discharge into our oil refineries, we are thankful for the foresight of Sir Stamford who began life as a clerk in the British East India Company.

He thought outside the box, seeing possibilities when others can only see rocks.

In the last couple of months, I spent my free time researched into Singapore in the 19th century and engaged myself into the power struggles between Raffles and William Farquhar where both of them claimed to be the chief founder of modern Singapore. Through the process of reading, I cannot resonate more with Nigam Tong Dow’s analysis. While William Farquhar fell in love with Karimon Islands which situated 30km west of Singapore Strait and was a sailing icon in the olden days, Raffles chose to believe in Singapore was a great city once upon a time as what historical records had claimed. He established a British settlement on an undeveloped land called Singapore which was famous for piracy and killing during that era. Singapore became prosperous through the influx of immigrants since then.

What was the strategic importance of Singapore?

In the Anglo-Dutch Treaty negotiation, the British relinquished their claim for £100,000. In exchange, Dutch gave away their possessions in continental India, Malacca and Singapore which was in dispute. The British gave away all interest in the East Indian Archipelago and Sumatra. Henceforth, the British sphere of interest was the whole of the Malay Peninsula, and the Dutch sphere of interest was the Netherlands East Indies.

During the negotiation, the greatest pressure was from the Netherland authorities in Java. They demanded for the return of Singapore to the Dutch. However, at least two Dutchmen took a realistic view.  de Kock, commander-in-chief in Java and deputy Governor-General, made his observation in a letter dated 19 Jun 1824:

“My opinion has always been that we made rather too great a fuss about our pretended rights over Singapore.”

A Dutch patriot, Colonel Nahuijs, who visited Singapore in 1824 had this to remark:

“I believe that no person with any feeling can help being impressed when setting foot in Singapore because he can now see as a seat of European trade and industry the place which only five years before was a cavern and hiding place for murderers and pirates. The impression, it is true, is considerably dimmed for the Hollander by the thought that the English are settled in a place to which only his nation had a right, but as a friend of humanity he must prefer seeing this island in the possession of civilized Christians to it being in the hands of pirates and murderers, who made the journey through the Straits of Malacca exceedingly dangerous. And let me ask you, Would Singapore not still have been to this date the same den of murderers, as it was in the past, had it not been taken over by the English?...

If the British Government, instead of entering into their contracts with the son of the King of Johore and the head of the pirates, had driven the latter from Singapore by armed force and had established itself there, then the title of possession would have been based on the Right of War and our Dutch Government, which had left the pirates so many years in the undisturbed possession of Singapore, would certainly not have all these strong and convincing arguments which we can now bring forward. ”

After Raffles retired and returned to England in 1824, he went ahead to claim for his pension of £500 a year. Instead, EIC demanded immediate repayment of  £22,272, including the amount he spent travelling between Bencoolen and Singapore when settling Singapore as a trading port. Eight months after his death, EIC accepted Sophia’s recommendation to end the sorry affair by a sum of £10,000 (7 Mar 1827). 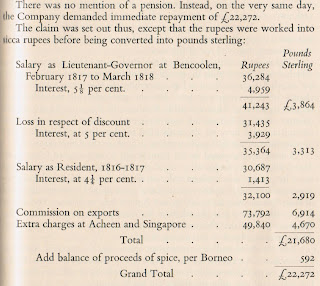 The way Singapore fully embraced Stamford Raffles, Singapore's former economic adviser, Dr Albert Winsemius from the Netherlands had done a great part. Winsemius led a UN Survey Mission to Singapore in 1960 and at Singapore Government's invitation continued as Singapore economic adviser for nearly 25 years until 1984. In 1961, Winsemius  laid two pre-conditions for Singapore's success: first, to eliminate the communists who made any economic progress impossible; second, not to remove the statue of Stamford Raffles. 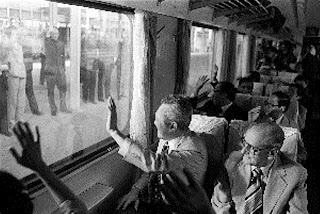 (The then Singapore Prime Minister Lee Kuan Yew and Dr Albert Winsemius in a train departing from Guangzhou during a Singapore delegation visit to China in 1980. Photo source: Asiaone)


In his 1961's report, Winsemius said Singapore would need large-scale technical, managerial, entrepreneurial and marketing know-how from America and Europe. Investors wanted to see what the new socialist government in Singapore was going to do to the statue of Raffles. Letting it remain would be a symbol of public acceptance of the legacy of the British and could have a positive effect. Since then, Singapore Government decided to  leave this monument in order to recognise Stamford Raffles as the founder of modern Singapore. It is also pertinent to note that although British and Netherlands laid their respective claim of Singapore between 1819 and 1824, both contributed to the progress of "modern" Singapore since 1819 and 1960s respectively.
Posted by ....... at 11/27/2012 12:30:00 pm

Email ThisBlogThis!Share to TwitterShare to FacebookShare to Pinterest
Labels: once upon a time, travels, 政治, 殖民地, 道德