26th December 2014 marked the 10th  anniversary of Tsunami tragedy of countries in Southeast Asia and South Asia. Banda Aceh and Meulaboh in Sumatra of Indonesia were severely hit. Tourist spots at Phuket and Penang were not spared. The Tsunamis also reached Sri Lanka and wiped out some of the Tamil Tiger terrorists as reported in the news. 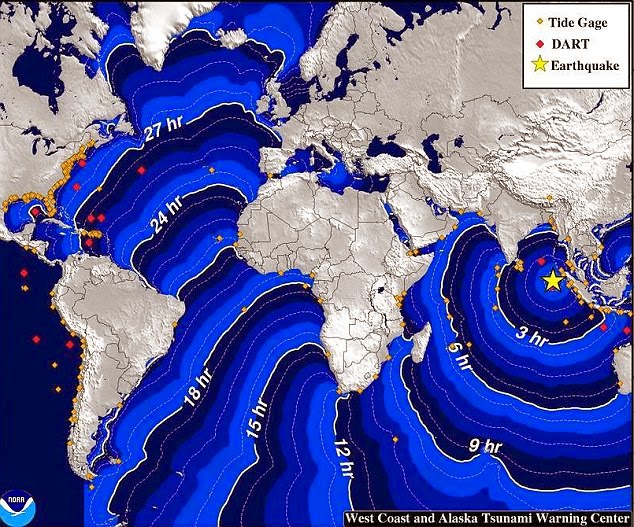 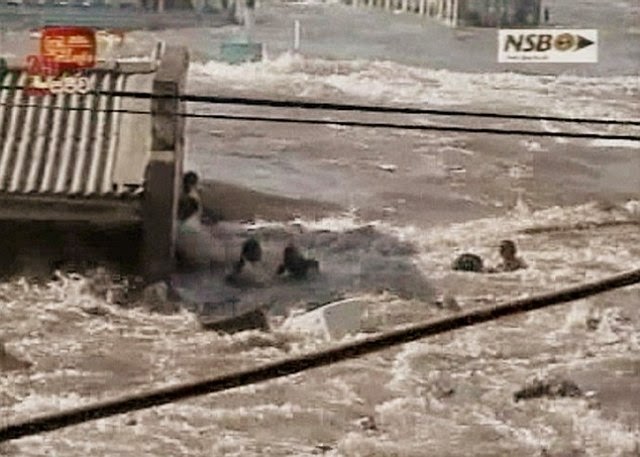 (Residents were swept away in Sri Lanka when the tsunami reached its coast. The tsunami also wiped out some of the Tamil Tiger terrorists as reported in the news. Picture credit: www.dailymail.co.uk)

Based on information from Wikipedia, the U.S. Geological Survey reported the total depth toll as 227,898. However, another report by Siti Fadilah Supari, the Indonesian Minister of Health at the time, estimated the death total to be as high as 220,000 in Indonesia alone. Due to some people died in remote areas or washed out to sea, the exact number would never be known.

The Tsunamis caused by the most powerful earthquake since 1964. It was recorded as 9.1 Richter scale with the epicentre at about 160km off the western coast of Sumatra. The earthquake radiated along a 1200km fault-line running north-south. Experts believed that the mega-earthquake started at 30,000m below the Indian Ocean floor. The quake itself is known as the “Sumatra–Andaman earthquake” by the scientific community. 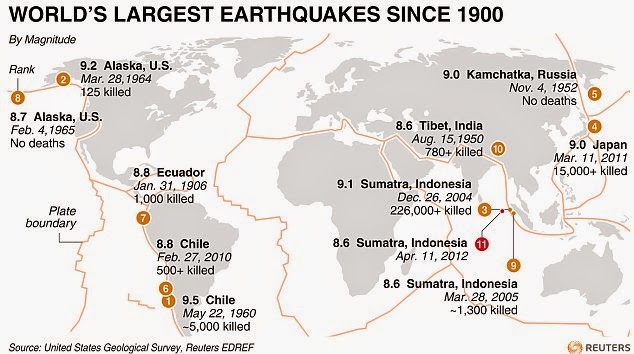 （The 2004 earthquake is the third largest since 1900. Picture credit: www.dailymail.co.uk）

The devastated earthquake occurred on 7.58am Indonesia time, or 8.58am Singapore time. Soon after that, we felt some shaky effects mainly for people living in the eastern part of Singapore. We were lucky that Sumatra provided natural shelter for major part of Malaysia and Singapore. Otherwise, imagine that the tsunamis travelled at about 700km/hr in open sea, it would reach Singapore in less than an hour. The wave height surged to 10 to 20 metres near coast and rushed in at about 50km/hr. Lives could never be the same again if our many small islands in Singapore have to face with such natural disaster. 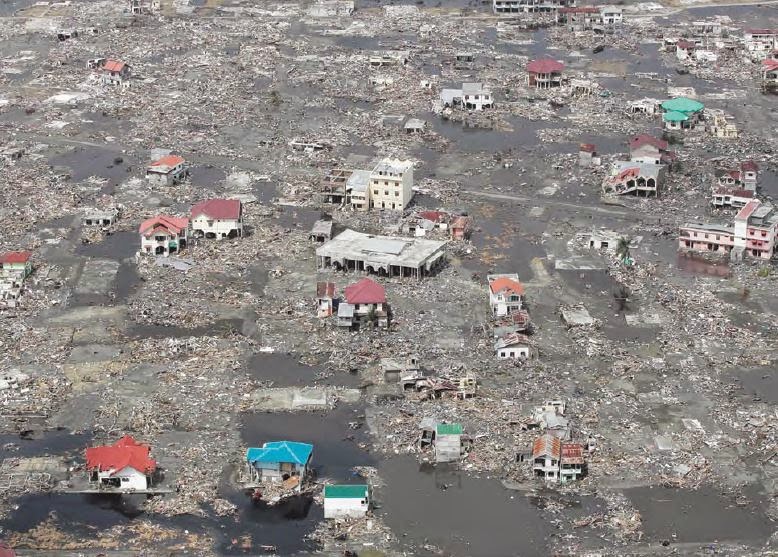 Operation Flying Eagle and the RSN

The now Manpower Minister Tan Chuan Jin assumed the command of the Humanitarian Assistance Support Group back then. He was a 36 year old Colonel then and was the Commander of 7 SIB, a Guards unit in the Singapore Arm Forces (SAF). The humanitarian relief mission was carried out under the code name Operation Flying Eagle (OFE).

For the Republic of Singapore Navy (RSN), if the RSS Courageous collision case on 3rd January 2003, happened barely less than two years ago, is considered as the darkest day of the RSN’s history, OFE should probably be remembered as the RSN ‘s most meaningful deployment thus far. Within short span of preparation time, all three LSTs in Singapore were deployed with fully loaded logistics and replenishment aids to Meulaboh. The other LST (RSS Resolution, 208) was sent to the Persian Gulf in November 2004 for 4 months to support the reconstruction efforts in Iraq.

(All the 3 LSTs in Singapore and numerous landing craft were deployed to Meulaboh for the humanitarian effort. Picture credit: "Reaching out flying eagle", SNP International Pte Ltd)

Every man and woman, regardless of putting on uniform or as MINDEF civilians who contributed along the value chain for tsunami relief in Indonesia, should take pride of what they had done for our friends who lived so close to us. Many in-service personnel, reservists and civilians volunteered to land their helping hands.

It was indeed an extremely valuable occasion to pull together the spirit of the service personnel after the RSS Courageous incident. The service personnel’s morale was high as they had a clear sense of purpose and felt that what they did for the Indonesia people was worthwhile. In my 21 years of working hand in hand with the RSN, this was probably the most heart-warming scene I had ever seen. It was from the bottom of their hearts without having to put up a "show".

My neighbour, MAJ Abdul Nasir bin Husssein from the Army was nominated as the S4 (logistic officer) for OFE. After some years, He jokingly said that thank to OFE, he managed to obtain his next rank as Lieutenant Colonel and extended his SAF career. Otherwise he would have to leave at the age of 45 and learn to cope in the commercial world. 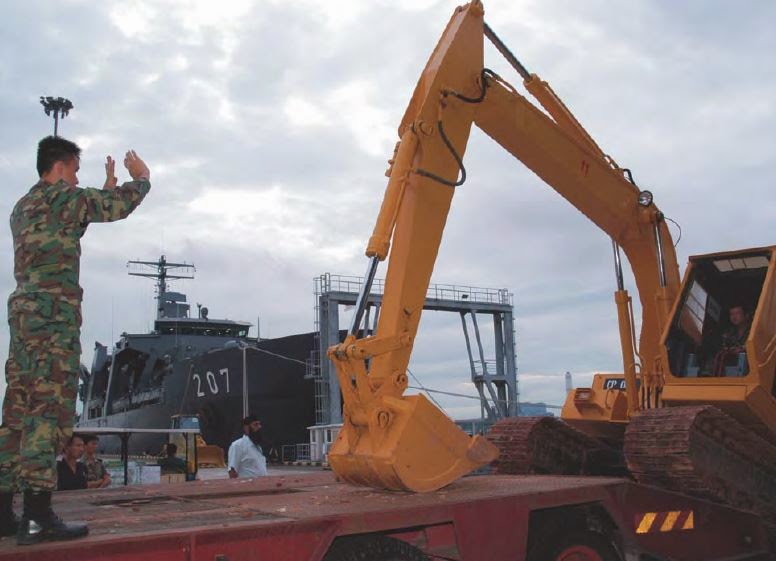 On 2nd January  2005, the first LST (RSS Endurance, 207) reached Meulaboh after leaving Tuas Naval Base for 50 hours. RSS Endurance, commanded by LTC Li Lit Siew, left Singapore on the new year’s eve. The look-outs on the LST saw an adult, a child and a hand clinging to a wooden plank. That was the first devastated scene sighted by the ship crew near Meulaboh. They knew that they had to work around the dead from then on.

In fact, the entire downtown area of Meulaboh was wiped out by the tsunami. About 40,000 residents lived in the town prior to the hit. The town had lost all communications and electricity. Bridges were broken and some roads went underwater or blocked by landslides. All the wooden houses were gone while concrete buildings withstood the earthquake and tsunami better. As what MG Endang Suwarya, the Indonesia military area commander, said, “The damage is truly devastating. 75% of the west coast, in some places it is 100%, is gone.”

It was assessed that bringing in supply from the sea was the best means to aid the local. Although the LST was not able to berth at Meulaboh, the LST had a well dock which carried landing craft such as FCU (Fast Craft Utility) and FCEP (Fast Craft Equipment and Personnel) to bridge such gap. They were designed to offload vehicles and relief supplies ashore at suitable landing beaches. Naval divers were sent in to clear the underwater obstructions at the identified beaches.

Of special note, usually a ship with a well dock would be named as LSD (Landing Ship Dock) or LPD (Landing Platform Dock). Ths Singapore version was named as LST (Landing Ship Tank) probably due to some political considerations. 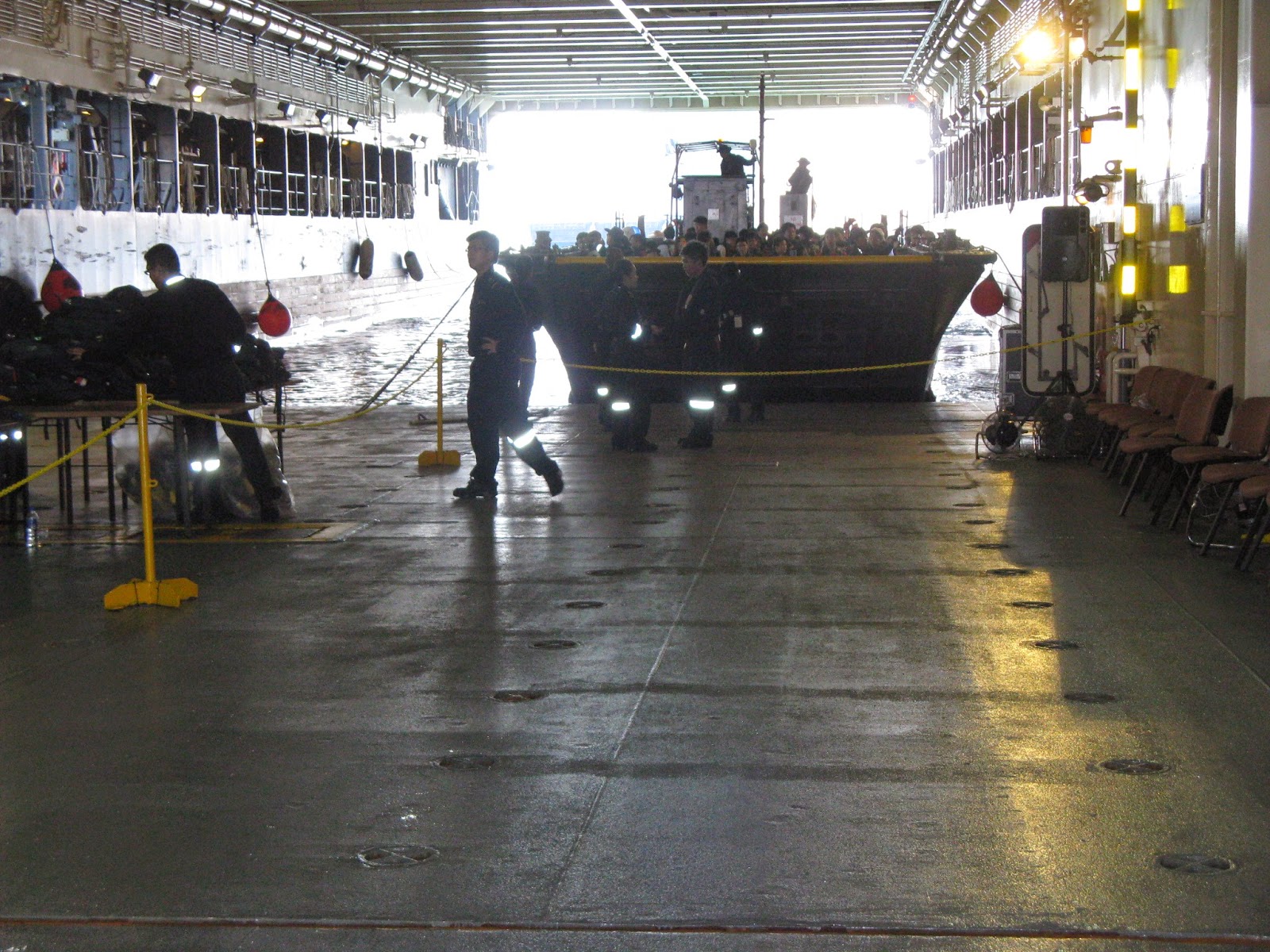 (The LST has a well dock which carries landing craft such as FCU and FCEP. Picture taken during Navy open house 2010)

The landing craft were among the first to provide supplies from the LST to the locals. Supplies could move into Meulaboh 20 times faster than before. RSS Endurance carried 470 people, 51 vehicles and heavy equipment and 350 pallets and crates of relief supplies. They were discharged to the shore by the landing craft.

LTC Gregory Goh was the commander of the Landing Craft Squadron, commonly known as 195 Squadron. He also assumed the role as commander of the Naval Task Group, OFE. I remembered him as a gentle, polite and humble person. I first knew him when he was a Commanding Officer of an old LST (County class) in the 1990s. His landing craft crews were working 16 hours a day and even more at times. They made numerous trips between LST and shore everyday but they did not have a single chance to step onto the soil of Meulaboh. The landing craft operators were among the first to perform their duty in the early morning and often the last to go to bed.

The massive disaster had brought together the Singaporeans’ compassion. Many donated generously to the Tsunami Relief Fund. As an example, the Singapore Red Cross collected S$84 million within days. Singapore companies contributed equipment such as electrical generators and water purification sets. NGOs such as Touch Community Services, Mercy Reliefs and Tzu Chi, alongside with many other Singapore professionals such as doctors, nurses and pharmacists, volunteered their services. 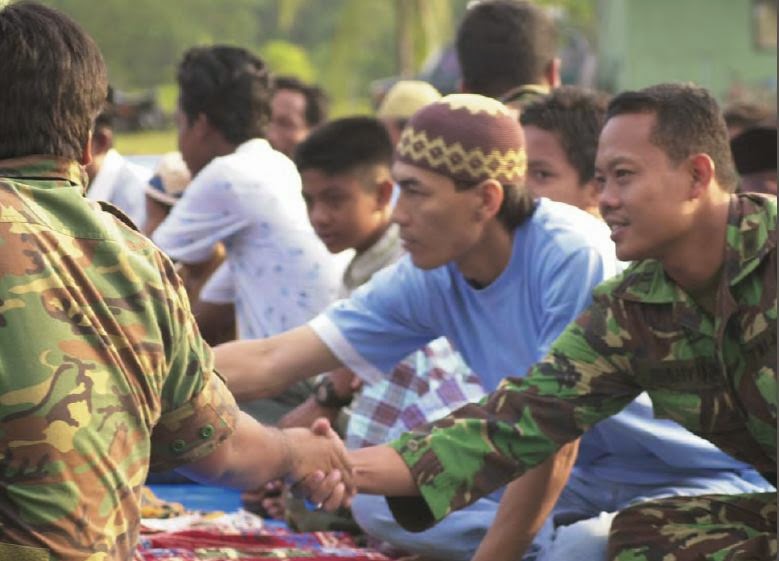 As most of the NGOs did not have their own means to bring in relief supplies and personnel to the sites, the LSTs and landing craft came in handy.

With the United Nation and the Indonesian Arm Forces (TNI) coming in for rehabilitation and reconstruction, it was also time for SAF to close the emergency relief chapter. It was time to go home. The NGOs took over the subsequent tasks from the SAF. The beach landing sites were symbolically handed over to the TNI. 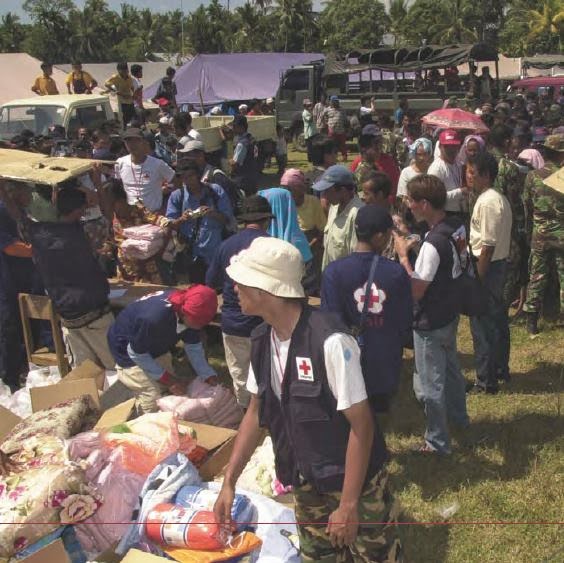 COL Edwin Low, former Chief Naval Medical Officer and the Chief Medical Officer for OFE, recalled a TNI soldier who was with him. The soldier had lost his home. His children were still missing. However, he chose to work to help others instead of searching for his old children.

Major Nur Effendi said he met a TNI officer who was helping the survivors. His daughter was buried in the rubber of his house and his wife was sent to Jakarta for medical treatment. The officer said he had returned his daughter to God and assured her that she was in a better place than before.

Many other TNI soldiers also lost their loved ones but carried on with their duties. Their determination to help other survivors inspired many Singaporeans. 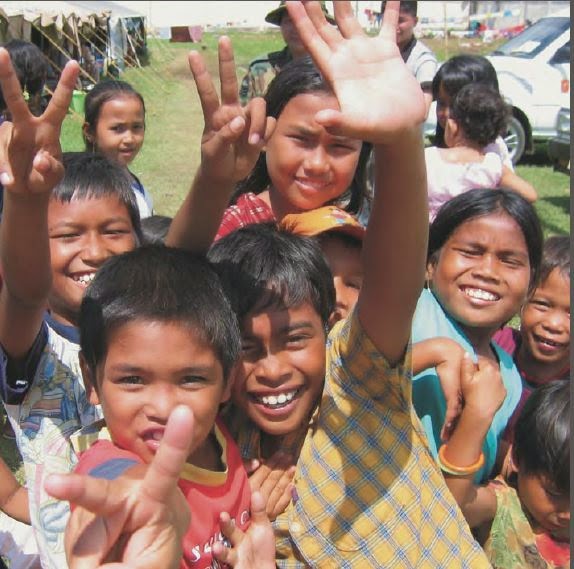 (Lives returned to normarcy. How are these bright and smiling faces doing after ten years since 2004? Picture credit: "Reaching out flying eagle", SNP International Pte Ltd)

Friday 21st January 2005 was Hari Raya Haji. It was also the day where the Humanitarian Assistance Support Group from Singapore handed things over to the TNI and the NGOs. Tan Chuan Jin exchanged farewells with COL Geerhan and soldiers of TNI. He boarded the Fast Craft Utility after all the men and equipment had embarked.

That evening, RSS Endurance and RSS Endeavour sailed past Meulaboh’s mass grave. In memory of the dead, the ship crews lined up on deck, and the two ship COs each tossed a floral wreath into the sea. 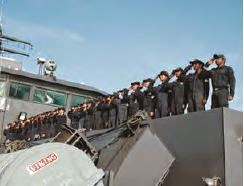 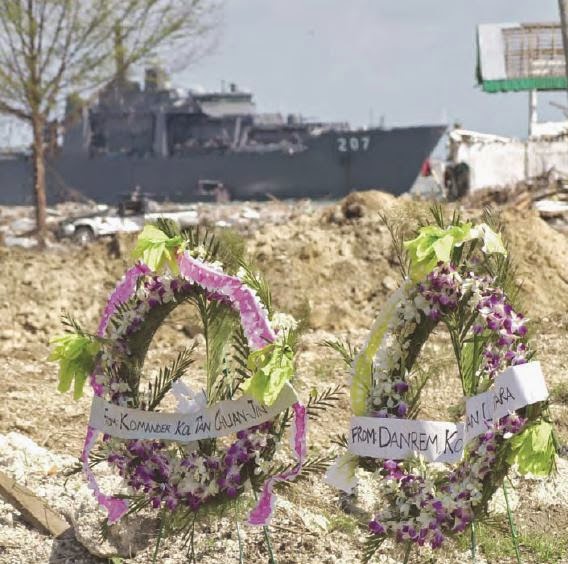 (It was time to move on with life. Picture credit: "Reaching out flying eagle", SNP International Pte Ltd)

Ordinary folks among Singaporean and Indonesian are friends of each others despite that there are occasional differences at political front.

On a personal level, Operation Flying Eagle was an enriching and satisfying experience for those who landed their helping hands to the Meulaboh people. They had reached out and made a difference for those who are distance away from our daily lives.

For the people in Banda Acer, the city and the people have picked themselves up from that disaster. They are simply amazing. 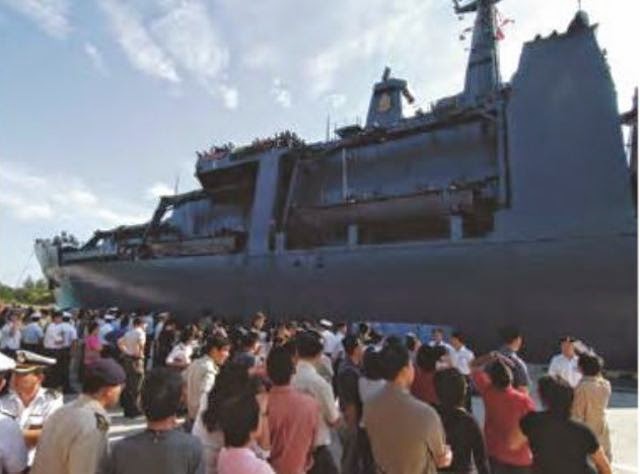 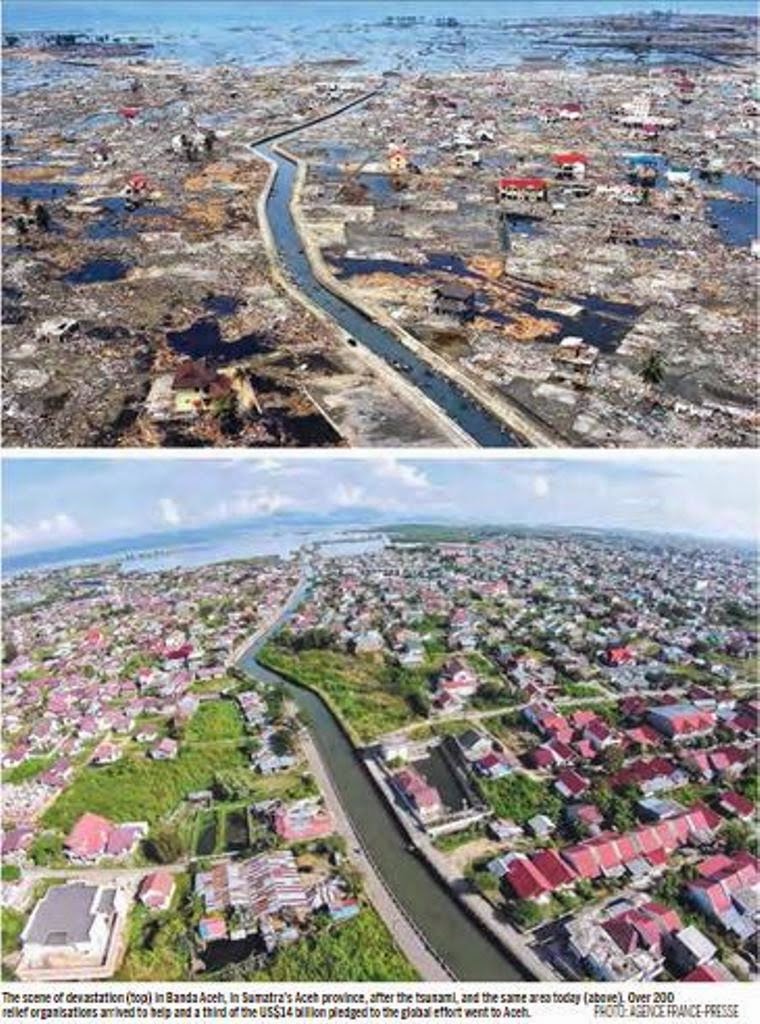 Email ThisBlogThis!Share to TwitterShare to FacebookShare to Pinterest
Labels: disaster, humanities, once upon a time, Singapore, 国防, 新加坡, 道德

I wanted to thank you for this excellent read!! I definitely enjoyed every little bit of it.
I've got you book-marked to check out new things you post…

Hmm it seems like your site ate my first comment (it was extremely long) so I guess I'll
just sum it up what I submitted and say, I'm thoroughly enjoying your blog.
I as well am an aspiring blog writer but I'm still new to everything.
Do you have any helpful hints for first-time blog writers?

I'd definitely appreciate it.